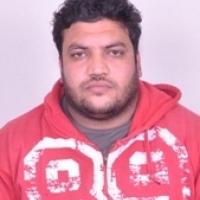 Nicknames
Bindra (Facebook profile, 22 Dec 2016)
Other sports
He played kabaddi before his accident and won a national powerlifting title in 2006. (Hindustan Times, 30 Mar 2016; eenaduindia.com, 13 Oct 2015)
Impairment
He lost his right leg in an accident in 2004. (Hindustan Times, 30 Mar 2016)
Other information
SANCTION
In February 2011 the International Paralympic Committee [IPC] announced he had been suspended for an anti-doping rule violation. He returned an adverse analytical finding for methandienone metabolites and 19-norandrostenedione [both exogenous anabolic androgenic steroids] in a urine sample provided in an out-of-competition test at the 2010 Asian Para Games in Guangzhou, People's Republic of China. He accepted the violation and was suspended for three years from December 2010. (ipc-powerlifting.org, 09 Feb 2011; newsrt.co.uk, 9 Feb 2011)