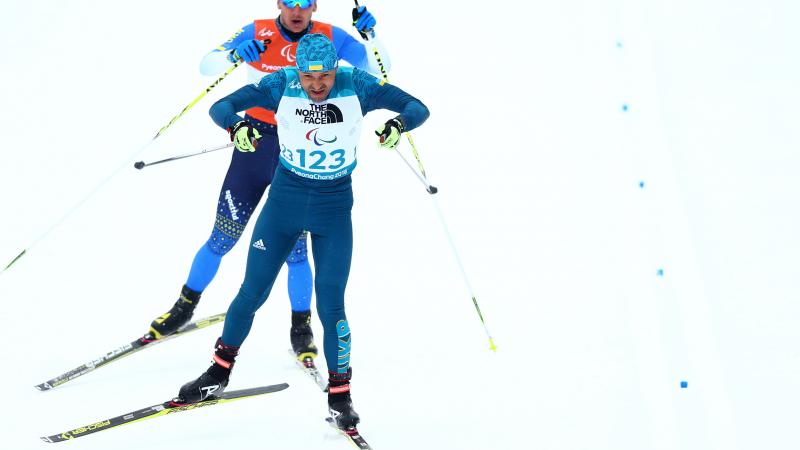 Vitaliy Lukyanenko, guided by Borys Babar, did not have the best start to the season as he could only grab one bronze across two World Cups in the men’s biathlon vision impaired.

But what the Ukrainian especially enjoys is competing on the biggest stage of all. At PyeongChang 2018, Lukyanenko took his fifth and sixth Winter Paralympic titles in the sprint and long distance races.

Four years before, he claimed two golds and one bronze in biathlon and one cross-country silver in Sochi.

Lukyanenko had to undergo surgery shortly afterwards and stopped skiing for two years. In 2016, his teammates convinced him to return to competition.

Despite holding six golds, one silver and two bronze at the Paralympic Winter Games, Lukyanenko has yet to seal a world title.

Prince George 2019 will present another good opportunity for Lukyanenko to finally achieve his long-time goal.

When and where did you begin this sport?
He began skiing in 1987, at age eight, in Sumy, Ukraine. He joined the Invasport sports centre for Para athletes in Sumy in 1997.
Why this sport?
"During my childhood, biathlon was a very fashionable sport."
Club / Team
Invasport: Kharkiv, UKR
Name of coach
Borys Babar, UKR, from 2012; Anatoly Zavedeev, UKR

In 2009 he dislocated his shoulder. In December of the same year he injured his back during a training session in Canada. (kp.ua, 18 Mar 2010)
Sporting philosophy / motto
"Don't underestimate your rival." (Athlete, 07 Mar 2018)
Awards and honours
He was named one of the six best Ukrainian athletes of the year at the 2018 Ministry of Youth and Sports of Ukraine Sports Constellation Awards Ceremony. (isport.ua, 21 Dec 2018)

In December 2018 he was named an Honourable Citizen in the Kharkiv region of Ukraine. (oblrada.kharkov.ua, 06 Dec 2018)

He was flag bearer for Ukraine at the opening ceremony of the 2018 Paralympic Winter Games in Pyeongchang. (pyeongchang2018.com, 09 Mar 2018)

He has received the title of Honoured Master of Sport in cross-country skiing in Ukraine. (paralympic.org.ua, 22 Feb 2022)
Other sports
He competed in both cross-country skiing and biathlon at the Paralympic Winter Games in 2002, 2006, 2010 and 2014. He competed solely in biathlon at the 2018 Games in Pyeongchang. (fakty.ua, 23 Mar 2018; SportsDeskOnline, 21 Dec 2021)
Impairment
He started losing his sight at age five due to optic atrophy. (fakty.ua, 01 Apr 2010)
Other information
HIATUS
After competing at the 2014 Paralympic Winter Games in Sochi, he required surgery and did not train for around two years. In 2016 his teammates convinced him to return to the sport ahead of the 2018 Paralympic Winter Games in Pyeongchang. (fakty.ua, 23 Mar 2018)