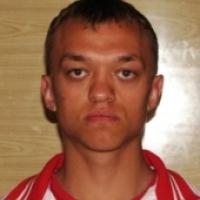 When and where did you begin this sport?
He began taking the sport seriously at age 19 in Yakutsk, Russian Federation.
Why this sport?
He has enjoyed participating in sport since his school days. During a celebration at a sports complex, he and some friends went into the gym and discovered the sport. He was motivated to continue training in powerlifting because he quickly achieved good results.
Name of coach
Pyotr Davydov [personal], RUS

He took part in the Paralympic torch relay by lighting the cauldron in Yakutsk, Russian Federation, ahead of the 2014 Paralympic Winter Games in Sochi. (yakutia24.sakha.ru, 25 Feb 2014)

He received the Order for Merit to the Fatherland in recognition of his performance at the 2012 Paralympic Games in London. (ykt.ru, 10 Oct 2012)
Famous relatives
His younger brother Roman has competed in Para powerlifting and Para athletics [shot put]. (Athlete, 23 Apr 2016)
Ambitions
To become a Paralympic champion. (Athlete, 25 May 2019)
Impairment
He was born with chondrodysplasia, a condition that can affect the skeletal system, skin and eyes. (ykt.ru, 10 Oct 2012)