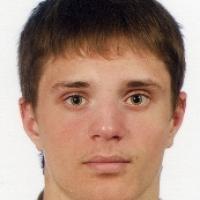 When and where did you begin this sport?
He began training at age 14 in Krasnodar, Russian Federation.
Why this sport?
He was invited to join the sports section at his school and was spotted by coach Yury Shkabarnya. He did not initially enjoy the sport but grew to like it after he started winning titles at different levels.
Club / Team
Krasnodar Regional Centre of Paralympic Preparation: Russia
Name of coach
Nadezhda Krivulya [personal], RUS

He received the Order for Merit to the Fatherland [second grade] in the Russian Federation in recognition of his performance at the 2012 Paralympic Games in London. (kremlin.ru, 10 Sep 2012)

He has received the title of Honoured Master of Sport in the Russian Federation. (minsport.gov.ru, 25 Dec 2020)
Ambitions
To win gold at the 2020 Paralympic Games in Tokyo. (Athlete, 26 May 2019)
Impairment
His spinal cord was injured during childbirth. (rg.ru, 10 Jan 2008)