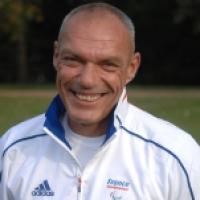 When and where did you begin this sport?
He grew up actively involved in sports until his accident while serving in the army in 1982. Three years after losing his left leg, he took up para-sport beginning with para-triathlon. In 1995 he switched to para-athletics.
Why this sport?
He says he loved track and field from the start, because it's all about pushing yourself to the limit. He says that following his accident, "sport allowed me to rebuild myself, my confidence."
Club / Team
AMSL Frejus / Saint Raphael Athlétisme: France

Nicknames
'Pappy Boyington' or 'Papy' [named after the 1970s American television series character Major Gregory 'Pappy' Boyington, who was based on a real life WWII flying ace. He earned the nickname for his good looks and military background]. (commet-1901.org, 01 Nov 2004)
Injuries
He ruptured the medial meniscus in his knee in June 2008 and was operated on immediately, which hampered his preparation for the 2008 Paralympic Games in Beijing and prevented him from competing in the long jump at the Games. (athletesmondiaux.com, 01 Nov 2008)
Awards and honours
He has been awarded the military Legion of Honour. (cotedazur.franceolympique.com, 01 Jan 2008)
Impairment
He stepped on a land mine in Beirut in 1982 while serving in the army, resulting in the amputation of his lower left leg. Following his rehabilitation he attended the Inter-Army Sports School where he became a qualified military physical trainer. (commet-1901.org, 01 Nov 2004)
Other information
LONDON 2012 CAMPAIGN
He says that following the 2008 Paralympic Games in Beijing he found it hard to find sponsors and financial support. "Everyone forgot about us. Everyone turned their back on me, I had no support, no more sponsors, I had to put up my Paralympic medals for sale. For the next two years I really struggled." Once he finally found a sponsor he set his sights on competing in London. "I'm going to earn a place at London 2012 and show everyone who didn't believe in me they were wrong, once again I'll pull myself out of trouble alone. When a knee hits the ground, you must lift your head!" (lavoixdunord.fr, 03 Jun 2011)

LACK OF GOVERNMENT SUPPORT
He is often critical of the lack of financial support and media exposure given to Paralympians compared to able-bodied Olympians. "The training is just as difficult, we must sacrifice as much as able-bodied athletes, but for a lot less exposure in return." He also criticised the French government following the 2008 Paralympic Games in Beijing. "The politicians ignored us. [Former French President] Jacques Chirac at least showed us some respect and came to encourage us before we left for Sydney 2000 and Athens in 2004. But this time, no President, no ministers, they don't care about us." (patriciafarget.com, 01 Nov 2008)

YOUTH WORKER, PHYSICAL TRAINER
He remained in the army until 2002, when he quit to become a youth worker. "I help young people in tough situations, I try to help them get back on track and rediscover confidence in themselves, all through sport. And I say to myself sometimes, that sometimes the invisible wounds some of these kids have endured are far harder to support than my handicap." (commet-1901.org, 01 Nov 2004; cotedazur.franceolympique.com, 01 Jan 2005)