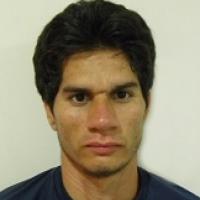 When and where did you begin this sport?
He took up the sport at age 17 at a club in the Brazilian state of Alagoas.
Why this sport?
Coach Walquiria Campelo invited him to try Para athletics after seeing him on a bus. He discovered he loves the adrenaline and speed of competition. "When you finish the race you feel like the world has stopped for you."

Nicknames
Yo (gamatv.com.br, 08 Sep 2016)
Hero / Idol
Brazilian Para athletes Antonio Delfino and Roseane dos Santos. (paralympic.org, 19 Apr 2015)
Injuries
In 2019 he suffered from a herniated disc and was off the track for two months. (olimpiadatododia.com.br, 16 Jun 2019)

He injured his back ahead of the 2008 Paralympic Games. (Athlete, 17 Feb 2011)
Awards and honours
In 2019 he received an acknowledgement from the government of Sao Paulo state in Brazil for his performances at the 2019 Parapan American Games in Lima, Peru. (Instagram profile, 24 Sep 2019)
Ambitions
To win a medal at the 2020 Paralympic Games in Tokyo. (gazetaweb.globo.com, 13 Nov 2019)
Impairment
He was born without both hands. (cpb.org.br, 08 Jun 2017)
Other information
PROSTHESIS
In 2019 he began to use prosthetic hands. "Some athletes have been using prosthesis since my first Paralympics, but I was never interested in developing and making a prosthesis for me to run. The evolution is very good, I already felt much better in the matter of balance, aerodynamics improves too, so it will help me a lot in my competitions. It's not only put on the prosthesis and start running. I need to have stronger arms because the centre of gravity switches, as well as my arm's weight. I have to adapt to a new running technique." (globoesporte.globo.com, 27 Aug 2019, 07 Nov 2019; gazetaweb.globo.com, 13 Nov 2019; )

NAME
His parents named him after Swedish Formula One racing driver Stefan Johansson. "My business is speed. It seems my parents sensed this when they chose my name." (Athlete, 17 Feb 2011; superesportes.com.br, 25 Jan 2011)

OTHER ACTIVITIES
He has served as a member of the National Athletes' Commission of Brazil. The commission aims to give the national government propositions in terms of sport, as well as inspecting sport public policies. (prorrogacao.com.br, 07 May 2017)