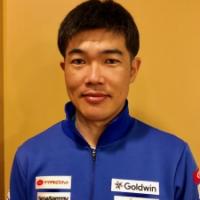 When and where did you begin this sport?
He began skiing at age four at a youth sports club in Okayama Prefecture, Japan.
Why this sport?
His father was a skier, and encouraged him to try the sport. He was introduced to cross-country skiing by a teacher at primary school.
Club / Team
Hitachi Solutions: Japan
Name of coach
Kazutoshi Nagahama [club], JPN; Misao Kodate [national], JPN

In 2018 he was presented with the Medal with Purple Ribbon by the Government Of Japan. (hitachi-solutions.co.jp, 07 May 2018)

In 2014 he received the Okayama Prefecture Sports Special Prize in Japan. (pref.okayama.jp, 11 Apr 2014)

In 2010 he received the Tokyo Honour Prize and Citizen Sport Grand Prize in Japan. (sports-tokyo.info, 13 Apr 2010)

He was flag bearer for the Japanese team at the opening ceremony of the 2006 Paralympic Winter Games in Turin. (1242.com, 27 Jul 2018)
Other sports
He has competed in cross-country skiing [1998, 2002, 2006, 2010, 2014, 2018] and biathlon [1998, 2002, 2010] at the Paralympic Winter Games. (SportsDeskOnline, 16 Mar 2018; paraphoto.org, 15 Mar 2018)
Ambitions
To win a medal at the 2022 Paralympic Winter Games in Beijing. (skiblog.jp, 11 Nov 2021)
Impairment
When he was a child, his left arm was amputated below the elbow after it got caught in a combine harvester that his grandfather was driving. (hitachi-solutions.co.jp, 27 Jan 2013)
Other information
MOTIVATION
He considered retiring from the sport following the death of his grandfather in 2012, but says he decided to continue competing after finding renewed motivation through his two sons. "After the 1998 Paralympic Winter Games in Nagano, I heard from my father that my grandfather said that he would be willing to give his left arm to me if it were possible after the accident. At that time, I made a firm resolution to win gold for him in order to help him to let go of his sense of guilt. I was able to win gold [in the standing 1km sprint classic and the standing 10km classic events] at the 2010 Paralympic Winter Games in Vancouver, thanks to my grandmother who had died as well as my grandfather. When he passed away unexpectedly in 2012, I heard that he was proud of me. At that time I realised again that he was my biggest motivation. Although I didn't claim any medals at the 2014 Paralympic Winter Games in Sochi, I received a medal, made by my eldest son who was impressed with my performance. It gave me a new goal, to win gold at the 2018 edition [in Pyeongchang] for my sons." (1242.com, 27 Jul 2018)

OTHER ACTIVITIES
He has served as a member of the board of directors and the chairperson of the Athletes' Commission at the Japan Para Ski Federation. (jps-ski.com, 22 Dec 2020)