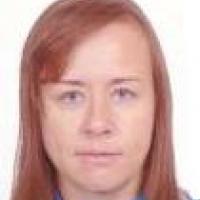 When and where did you begin this sport?
She began skiing in 2003 in Kovel, Ukraine.
Why this sport?
She went to a gym where she met coach Valery Druzhinovich. He told her about Paralympic sports and suggested she try athletics. Several years later she took up skiing.
Club / Team
Invasport Volyn: Lutsk, UKR
Name of coach
Vasyl Mukshyn, UKR; Valery Kazakov, UKR

For her performances at the 2006, 2010 and 2014 Paralympic Winter Games, she was decorated with the Orders of Princess Olga [third, second and first grades, respectively]. The honour is presented for Ukrainian women in recognition of achievements in state, scientific, educational, cultural and other social areas. (president.gov.ua, 23 Aug 2014, 25 Mar 2010, 03 Apr 2006)

She has received the titles of Honoured Master of Sport in cross-country skiing and of Master of Sport of International Class in biathlon in Ukraine. (mms.gov.ua, 31 May 2021)
Other sports
She competed in cross-country skiing and biathlon at the Paralympic Winter Games in 2006, 2010, 2014 and 2018. (SportsDeskOnline, 16 Mar 2018)
Ambitions
To win a gold medal at the 2022 Paralympic Winter Games in Beijing. (Athlete, 04 Mar 2022)
Impairment
In 1991 at age seven she lost her right arm in a car accident. Her mother and her younger brother died in the accident. (Athlete, 04 Mar 2022)