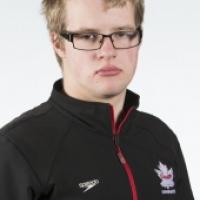 He was named the 2012/13 Male Para-Swimmer of the Year by Swim Alberta in Canada. (swimalberta.ca, 2014)
Impairment
He was born with too many bones in his limbs, which restricts growth and range of motion in his arms and legs. (lethbridgelivingonline.com, 13 Jul 2012)
Other information
UNIVERSITY FIRST
At the 2012 Paralympic Games in London, he became the first University of Lethbridge swimmer to compete at an Olympic or Paralympic Games in the university's 75-year history. (swimming.ca, 2015)