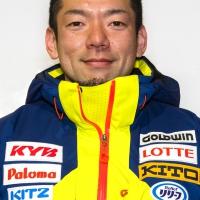 When and where did you begin this sport?
He took up the sport in the fifth grade of primary school in Kitami, Japan, and began competing in grade seven of middle school.
Why this sport?
He was taught to ski by his father, who was a coach. He was inspired to take up the sport seriously after watching the 1998 Paralympic Winter Games in Nagano on television.
Club / Team
Maruhan: Japan
Name of coach
Saori Ishii [national], JPN

He was Japan's flag bearer at the closing ceremony of the 2014 Paralympic Winter Games in Sochi. (paralympic.org, 16 Mar 2014)

He received numerous honours in Japan including the Hokkaido Medal of Honour, the Abashiri City Medal of Honour, and the Nagano Shinano Mainichi Award, after winning a gold medal at the 2010 Paralympic Winter Games in Vancouver. (Athlete, 16 Feb 2014)
Other sports
He has competed in wheelchair marathon at national level. (sapporospokyo.heteml.jp, 20 Dec 2019)
Ambitions
To win a medal at the 2022 Paralympic Winter Games in Beijing, and to compete at the 2026 Games in Milan-Cortina. (nikkei.com, 16 Feb 2022; Nippon Challenged Athlete Radio, 22 Mar 2021)
Impairment
He sustained spinal cord injuries in a traffic accident while he was in the third grade of primary school. (Athlete, 10 Mar 2018, 16 Feb 2014)
Other information
OTHER ROLES
He has served on the board of directors of the Japan Para Ski Federation. (jps-ski.com, 28 Oct 2020, 15 Dec 2018)