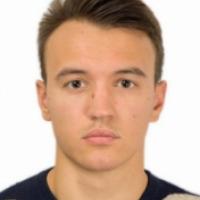 When and where did you begin this sport?
He took up the sport in 2004 in Krasnoyarsk, Russian Federation.
Why this sport?
His parents wanted him to be better integrated into society and took him to an alpine resort, where a local alpine skiing coach noticed him. "At age six, I saw children skiing. My parents asked me, 'Do you want to?' I really wanted to."
Club / Team
Youth of Moscow: Russia
Name of coach
Alexander Nazarov [national, personal], RUS

He broke his arm during the slalom event at the 2013 World Championships in La Molina, Spain. He continued to compete with his arm in plaster, and won silver medals in giant slalom and super combined. (newslab.ru, 27 Feb 2013)
Sporting philosophy / motto
"If you fall down nine times, you must stand up 10 times." (Athlete, 14 Mar 2014)
Awards and honours
In October 2018 he and Russian Para skier Ekaterina Rumyantseva received the International Giuseppe Sciacca Award in Rome, Italy. (paralymp.ru, 17 Oct 2018)

In recognition of his performance at the 2018 Paralympic Winter Games in Pyeongchang, he received the Order of Honour in the Russian Federation. (kremlin.ru, 20 Mar 2018)

In November 2015 he received the Best Debut Award from the International Paralympic Committee [IPC], in recognition of his achievements at the 2014 Paralympic Winter Games in Sochi. (paralympic.org, 14 Nov 2015)

For his achievements at the 2014 Paralympic Winter Games in Sochi, he received the Order for Merits to the Fatherland [fourth class] in the Russian Federation. (kremlin.ru, 17 Mar 2014)