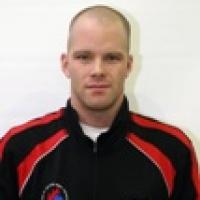 When and where did you begin this sport?
He started to train as a competitive swimmer when he was 15.
Why this sport?
His aunt set up a phone call with the national coach which led to a training session.

In 2002 he was inducted into the Nova Scotia Athletes With a Disability Hall of Excellence. (doctorsns.com, 20 Sep 2002)
Impairment
In 1980 when he was six, he injured his leg while playing soccer with his brother Brett. At the hospital, doctors discovered he had bone cancer. He had a leg amputated just above the knee and spent the next two years undergoing treatment and surgery.The day he was supposed to leave hospital he was told the cancer had spread to his lungs. It was removed and he underwent further treatment. (CPC, 01 Aug 2007; andrewhaley.ca, 20 Jul 2010)
Other information
WORK
He works full time in the ticket sales department for Major League Baseball team Toronto Blue Jays. (andrewhaley.ca, 21 Dec 2011)

MASTERS DEGREE
He completed a four year Bachelor of Commerce degree at Dalhousie University from 1990 to 1994. In 1999 he completed his Masters of Sports Administration at the University of Ottawa. (andrewhaley.ca, 20 Jul 2010)