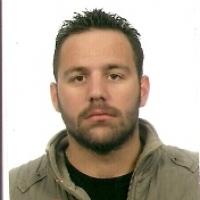 When and where did you begin this sport?
He learned to swim at age five in Khania, Greece, and began training and competing in Para swimming in 2009.
Why this sport?
"I wanted to become independent, to become active again."
Club / Team
Megalonissos: Heraklion, GRE
Name of coach
Chrysafis Vangelakakis [personal]; Ioannis Natsios [personal]
Training Regime
He trains six days a week.

He was named 2010 Male Athlete of the Year by Life & Style magazine. (Facebook page, 24 Feb 2020)
Other sports
He competed in both able-bodied swimming and able-bodied water polo in Crete, Greece, prior to his impairment. (greekcitytimes.com, 14 Nov 2020)
Ambitions
To win a gold medal at the 2020 Paralympic Games in Tokyo, and to publish his second book. (tokyo2020.org, 15 Oct 2020; lifo.gr, 03 Dec 2020)
Impairment
He was involved in a road traffic accident in 2006, which resulted in paraplegia. (Athlete, 12 Sep 2019)
Other information
CHANGING POLICE LAW
In 2005 he began studying at the Hellenic Police Academy to pursue a career in the police. However, after his accident in 2006 he was forced to end his career in the police due to a Greek law which required all police officers to be able-bodied. He successfully campaigned to change the law and allow people with impairments to serve in the police in Greece, and returned to work as a police officer in the sports service of the Hellenic Police in 2017. "The dream to put on the police uniform again lasted 11 whole years. It took a lot of effort and a lot of failures to be able to put on my police uniform again in 2017. I am really proud of that because I did it alone, without anyone's help, without the mediation of anyone. My inspiration was the idea itself and the belief in myself. It felt like standing up in first place on the podium and hearing my national anthem. It was like winning the gold medal. It meant we could finally go back to work and earn a salary. It also enabled other disabled people to dream of having a job in the police." (greekcitytimes.com, 14 Nov 2020 tokyo2020.org, 15 Oct 2020)

AUTHOR
He has written a children's book titled 'Dream'. "The message of my book is 'equality' and this is what I hope to pass on to children and to those who read it in general, with the ultimate aim of nurturing our little friends. We grew up in the wrong world, as no one came to teach us equality, power and love." (cnn.gr, 02 Dec 2016)