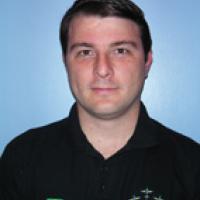 When and where did you begin this sport?
He took up the sport in 2003.
Club / Team
Ponta Grossa Association for the Emancipation of the Impaired [APEDEF]: Brazil
Name of coach
James Walter Lowry Neto [national]

He took part in the Olympic torch relay as it made its way through Ponta Grossa, Brazil, ahead of the 2016 Games in Rio de Janeiro. (arede.info, 15 Jul 2016)
Impairment
He had an accident while landing his paraglider, and suffered a lumbar injury that affected his lower limbs. (esportesdeaaz.com.br, 26 Jul 2016)
Other information
OCCUPATION
He is a qualified doctor, and runs an eye clinic in Ponta Grossa, Brazil. "The advantage of shooting is that I can train at night, but I would not say that it is easy to combine with my job. I know that I train less than a lot of my competitors, but I have to dedicate myself and work with what I have. I need to work and the sport is just a hobby, which I like a lot." (perfil.vitta.me, 22 Jun 2017; esportesdeaaz.com.br, 26 Jul 2016; periodico.jor.br, 15 Jul 2016)