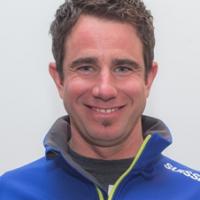 When and where did you begin this sport?
He first tried skiing as a child in Switzerland, and began training regularly at age 13. He returned to the sport through mono-skiing after his accident in 2000, and entered his first race during the 2002/03 season.
Name of coach
Gregory Chambaz [national]

Hobbies
Travelling with his family. (paralympic.org, 11 Mar 2017)
Most influential person in career
His wife Stephanie, and coach Stefan Grunder. (Athlete, 08 Mar 2014)
Injuries
He sustained a triple fracture to his right foot after crashing while competing in super G at the 2018 Paralympic Winter Games in Pyeongchang. He was able to continue competing at the Games because he does not have any feeling in his lower limbs. (christophkunz.ch, 21 Mar 2018; rts.ch, 15 Mar 2018)
Sporting philosophy / motto
"Give your best, even when the situation is difficult." (IPC, 10 Feb 2018)
Awards and honours
In 2014 he received a special achievement award from the Swiss Paralympic Committee. (swissparalympic.ch, 24 Oct 2014)

He was flag bearer for Switzerland at the opening ceremony of the 2014 Paralympic Winter Games in Sochi. (paralympic.org, 07 Mar 2014)

He was named the 2010 Swiss Disabled Sportsman of the Year. (IPC, 10 Feb 2018)
Ambitions
To compete at the 2019 World Championships in Slovenia and Italy. (christophkunz.ch, 21 Mar 2018)
Impairment
He has paraplegia as the result of a motorcycle accident in 2000. (IPC, 10 Feb 2018)
Other information
GOLDEN MILESTONE
His gold medal win at the 2014 Paralympic Winter Games in Sochi was Switzerland's 50th gold medal at a Paralympic Winter Games. (sochi2014.com, 15 Mar 2014)