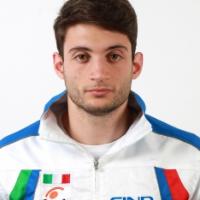 When and where did you begin this sport?
He has been swimming since the age of three months. He took up Para swimming in 2011.
Why this sport?
His mother encouraged him to try the sport. "When I partially lost my eyesight [in 2010], I thought I had finished my sporting career, but then I got to know the Paralympic world and I realised that I still had a long way to go."
Club / Team
Polha Varese: Italy
Name of coach
Massimiliano Tosin [club, national]; Micaela Bava [club, national]

Hobbies
Cars, music, technology. (Facebook profile, 17 Jul 2018)
Hero / Idol
Italian swimmer Marco Orsi. (superabile.it, 16 Aug 2012)
Sporting philosophy / motto
"You learn by making mistakes." (Facebook profile, 17 Jul 2018)
Other sports
He has competed in Para triathlon at national level in Italy. (oxygentriathlon.it, 24 Apr 2017)
Impairment
He has Leber's hereditary optic neuropathy, a condition that began to affect his vision at age 17. "It was like any other day. But that day, while I was swimming, I saw the stopwatch dial suddenly disappear and I realised that maybe something was wrong. Do you know when you remove the TV antenna and the screen fills up with grey dots? It was like that." (sanitainformazione.it, 27 Jul 2017; superabile.it, 16 Aug 2012)
Other information
SLOWING DOWN
After the 2016 Paralympic Games in Rio de Janeiro he decided to reduce the time he committed to swimming in order to focus on his studies in massage therapy. "I quit training as a professional but continued taking part in national and international competitions without looking for a place in the national team or specific results." (Facebook profile, 25 Jun 2018; repubblica.it, 21 Aug 2017; oxygentriathlon.it, 24 Apr 2017)

PARA TRIATHLON EXPERIENCE
He debuted as a Para triathlete at the 2017 Italian National Championships, competing in the sprint event. "For me, it was a beautiful experience, fascinating and interesting. I took it up just for fun, to understand what triathlon is all about. I have in my mind the possibility of competing in Tokyo [at the 2020 Paralympic Games] in this discipline, but in the meantime I am not interested in full-time training. I'd rather prioritise studies and work." (oxygentriathlon.it, 24 Apr 2017)

LATE INCLUSION
He was a late addition to the Italian team for the 2016 Paralympic Games in Rio de Janeiro, after they were allocated an extra place following the exclusion of Russian Federation athletes from the Games. (swim4lifemagazine.it, 23 Aug 2016)