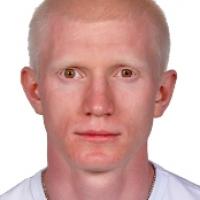 When and where did you begin this sport?
He began training in 2007 in St. Petersburg, Russian Federation.
Why this sport?
He played Para football but when he began to dream of competing at the Paralympic Games, he decided to switch to Para athletics.
Club / Team
St. Petersburg Athletics Academy: Russia
Name of coach
Andrey Eremenko [personal], RUS, from 2010

Hobbies
Spending time in his country house with family and friends, theatre. (Athlete, 27 Apr 2020)
Memorable sporting achievement
Winning gold in the T12 100m at the 2012 Paralympic Games in London. (Athlete, 27 Apr 2020)
Most influential person in career
Coach Andrey Eremenko. (Athlete, 24 Jun 2014)
Hero / Idol
Jamaican sprinter Usain Bolt. (Athlete, 07 Oct 2015)
Sporting philosophy / motto
"I don't consider myself an invalid. I live a normal, adequate life. I understand that, if I begin to pity myself, no good will come of it - only regret." (spb.aif.ru, 10 Oct 2012)
Awards and honours
He carried the Paralympic flame in St. Petersburg as the relay made its way through the Russian Federation ahead of the 2014 Paralympic Winter Games in Sochi. (fontanka.ru, 25 Feb 2014)

For his performance at the 2012 Paralympic Games in London, he received the Order of Friendship from the president of Russian Federation. (kremlin.ru, 10 Sep 2012)

He holds the title of Honoured Master of Sport in the Russian Federation. (minsport.gov.ru, 30 Dec 2019; Athlete, 31 May 2016)
Other sports
He played Para football at international level and won silver at the 2007 European Championship in Ankara, Turkey. (Athlete, 31 May 2016)
Ambitions
To compete at the 2020 Paralympic Games in Tokyo. (Athlete, 27 Apr 2020)
Impairment
He has a congenital eye condition. (spb.aif.ru, 10 Oct 2012)
Other information
EARLY DAYS
He and his older brother Evgeny have the same visual impairment. Their father died in a car accident when they were young, and he credits his parents for having encouraged them to integrate into society since they were children. "I played in the yard with regular kids, and my parents actively supported my hobbies. Therefore I always believed in myself." (spb.aif.ru, 10 Oct 2012; smena.ru, 08 Oct 2012)