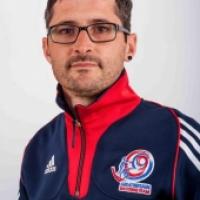 When and where did you begin this sport?
He began shooting at age seven, and took up shooting Para sport in 2000.
Why this sport?
"I started shooting with family members in my nan's garden shooting targets."

Nicknames
Jim, Bev, Bevis (channel4.com, 02 Aug 2012)
Hobbies
Fitness, mountain biking. (Twitter profile, 27 May 2020)
Sporting philosophy / motto
"I only train to win. My whole life is around winning medals." (ealingtimes.co.uk, 18 Jan 2021)
Awards and honours
In 2014 he was named Sportsperson with an Impairment of the Year at the Teignbridge Sports Awards in England. (teignbridge.gov.uk, 28 Nov 2014)

In 2011 he was named Herefordshire Sports Para Sportsperson of the Year in England. (herefordtimes.com, 28 Jun 2012)
Ambitions
To compete at the 2020 Paralympic Games in Tokyo. (ealingtimes.co.uk, 18 Jan 2021)
Impairment
He injured his right arm in a motorcycle accident in 1998. The accident was almost fatal and he says the moment he decided to fight for his life was when nurses were planning to remove his music collection. "I was going round a left-hand bend and for some reason I sat the bike up mid-bend and hit a van head on. I knew that my life was coming to an end. I could just feel my life slipping away and I accepted it. It was a peaceful time. I can remember the reason why I started to fight. The nurses were going through my CDs and they said, 'Well, he won't need any of these anymore'. They picked up my 'The Joshua Tree' album by U2 and that was it. I loved this album and I had this moment of, 'I'm not dying'. The surgeons said, 'Whatever he's doing, he's fighting'." (torquayheraldexpress.co.uk, 06 Apr 2014; Lightning Oak productions YouTube channel, 16 Jan 2018)
Other information
BIKE ENTHUSIAST
Prior to his accident, he was a passionate motorcyclist and mountain biker, but after injuring his right arm in a motorcycle accident he was told by doctors he would be unable to ride again. He has since learned to ride a mountain bike again by strapping his right arm to the right handle bar of the bike. "They [doctors] said, 'You're never going to use your arm again and I don't think you'll ever ride a bike again'. I lay in that bed for a couple of hours feeling even more numb than I was already. I was so fed up of being miserable. My life was going nowhere, I just felt angry all the time and I had one of those moments where I hit the bottom. [I had] to think, 'Right, now I can start coming back up'. It's been a long time coming to have the feeling I get mountain biking because I can do it and feel so able-bodied. It takes all of my injury away. I can't use grip with my right hand and, as such, I have to be strapped onto the right handle bar. It's all well and good until I come off and I'm strapped to a bike which is cartwheeling." (Lightning Oak productions YouTube channel, 16 Jan 2018)