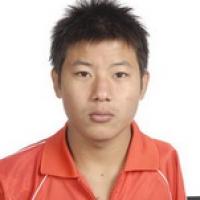 When and where did you begin this sport?
He began para-swimming in 2001 in Kunming, China.
Why this sport?
He was identified as having potential by the local association for athletes with an impairment.
Club / Team
Kunming Plateau Triathlon Team : China
Training Regime
He swims on average 10km per day.

He has suffered from a shoulder periarthritis, which made him consider retiring from the sport. (zqb.cyol.com, 24 Feb 2014)
Awards and honours
He was chosen to carry the torch through Yunnan in the run-up to the 2010 Asian Para Games in Guangzhou, China. (ynnu.edu.cn, 12 Sep 2012)

During his career he has been given the May 4th Youth Medal by the Yunnan provincial government in China. (wtj.hh.gov.cn, 05 Oct 2012)
Impairment
His left arm was amputated at age five after he touched an electric wire. (hh.cn, 08 Apr 2014)