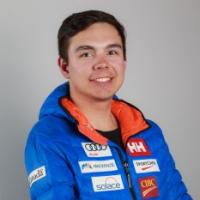 When and where did you begin this sport?
He began skiing at age two at Snow Valley in Edmonton, AB, Canada.
Why this sport?
"It was a choice between soccer and skiing and I chose skiing for the adrenaline rush."
Name of coach
Jean-Sebastien Labrie [national], CAN; David White

Year
2008
Competing for
Canada
Location
Kimberley, BC, CAN

Nicknames
Kickstand (IPC, 10 Feb 2018)
Hobbies
Working on cars. (Instagram profile, 21 Nov 2016)
Memorable sporting achievement
Obtaining three top-five finishes at the 2017 World Championships in Tarvisio, Italy. (IPC, 10 Feb 2018)
Hero / Idol
US alpine skier Bode Miller. (Athlete, 29 Dec 2010)
Injuries
He injured his knee after crashing during his first run at the 2014 Paralympic Winter Games in Sochi, but was still able to compete in the rest of his events at the Games. (sprucegroveexaminer.com, 17 Feb 2016; paralympic.ca, 2014)

He has partially torn the anterior cruciate ligament [ACL] in his left knee during his career. (IPC, 10 Feb 2018)
Sporting philosophy / motto
"Nothing to it but to do it." (IPC, 10 Feb 2018)
Awards and honours
He has been presented with the Cary Mullen Character Award from Alberta Alpine in Canada, and a Top Flight Award from St Paul's Academy in Alberta during his career. (IPC, 10 Feb 2018)
Other sports
He has also competed in able-bodied skiing competitions. (kirkski.com, 08 Mar 2013)
Ambitions
To compete at the 2018 Paralympic Winter Games in Pyeongchang. (Twitter profile, 31 Oct 2017)
Impairment
He was born with a brachial plexus injury that led to Erb's palsy and caused paralysis of his right arm. (kirkski.com, 14 May 2012)
Other information
OTHER ACTIVITIES
He has served as a member of the Athletes' Council of the Canadian Paralympic Committee [CPC]. (NPC Media Guide, 2018)

OCCUPATION
He works part-time in his family's plumbing and heating business. (IPC, 10 Feb 2018)