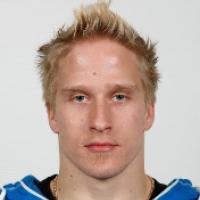 When and where did you begin this sport?
He took up the sport at age eight.
Why this sport?
A sports enthusiast his whole life, he began playing wheelchair basketball as a boy. He became interested in wheelchair racing after taking part in a half marathon in May 1998.
Club / Team
Porin Tarmo: Finland
Name of coach
Juha Flinck [personal], FIN, from 2001

In 2016 he was named the Sports Personality of the Year by the Finland Sport Journalist Union. He became the first Para athlete to receive the award. (paralympic.org, 25 Jan 2017)

In 2012 he received the Moment of the Year Award from the Finnish Olympic Committee in recognition of the gold medal he won in the T54 100m at the 2012 Paralympic Games in London. (suomenurheilugaala.fi, 2016)

In 2012 he was flag bearer for Finland at the opening ceremony of the Paralympic Games in London. (paralympic.org, 29 Aug 2012)
Other sports
He has played wheelchair basketball for the Nevsky Alliance team based in St. Petersburg, Russian Federation, and for Velez-Malaga in Spain. (is.fi, 14 Sep 2019; andaluciaesdeporte.org, 16 Nov 2018; paralympic.org, 09 Sep 2015; Athlete, 21 Aug 2021)
Ambitions
To win gold at the 2020 Paralympic Games in Tokyo. (yle.fi, 24 Mar 2020; sportshospital.com, 21 Dec 2020)
Impairment
He was born with paraplegia. (yle.fi, 12 Jan 2016)
Other information
FUTURE PLANS
He was considering retiring after the 2020 Paralympic Games in Tokyo, but said the postponement of the Games made him determined to continue competing beyond 2021. "At the moment [speaking in October 2020], it feels like it [Tokyo] may not be the end point for me. My results have been really good every year, I haven't had any big injuries and the motivation has been really good when it comes to training. Somehow I feel like I got even more hungry because of the coronavirus [pandemic]. In 2022, there will be the world championships, which will also be in Japan. From there it is not long before the next Paralympic Games in France. One year at a time, you never know what's going to happen." (mtvuutiset.fi, 21 Oct 2020; respecta.fi, 07 Oct 2020)

MEDIA ATTENTION
He says that after he won two gold medals at the 2004 Paralympic Games in Athens he initially struggled with the increased media attention. "At first, I didn't enjoy it at all. After Athens, publicity came from everywhere. Suddenly, everyone recognised you, there were invitations to events, and my face was on the cover of magazines. It was a strange feeling. I was really shy at the time, and with the publicity increase, I became even more reserved. Over the years, however, I began to get used to the publicity. I was getting more relaxed with the reporters and I learned to smile a little. However, I still don't like talking to strangers when I'm in public. I understand that people sincerely want to encourage me. Still, getting attention often feels stressful. Sometimes you feel paranoid. Imagining that everyone recognises you, although I'm sure they don't." (apu.fi, 21 Nov 2020)

BOOK
In 2020 his biography was released. The book was written by Finnish sports journalists Harri Laiho and Juha Luotola. "There aren't that many books about Para athletes. If someone identifies with the story of the book, then it's succeeded. The book contains details about my personal life that haven't been revealed before." (mtvuutiset.fi, 21 Oct 2020; respecta.fi, 07 Oct 2020)

WINTER BASE
He has spent the northern hemisphere winter months in Fuengirola, Spain, since 2008. "I first went to Vigo, I didn't understand the language. And the locals weren't too keen to speak English. Although the life is busy and training levels are insanely high, I like the lifestyle of the locals. They're a lot more relaxed." (is.fi, 14 Sep 2019)