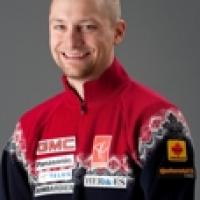 When and where did you begin this sport?
In 1992 shortly after his chemotherapy treatments had ended, his parents found a local learn to ski programme for children with an impairment at Grouse Mountain in Vancouver, BC, Canada. He began racing at age 12.
Why this sport?
"I moved on to a learn to race programme at Cypress Mountain in Vancouver and from there I was discovered by the BC Disabled Ski Team."

He has fractured his femur [right leg] while skiing. (alpinecanada.org, 01 May 2012)
Sporting philosophy / motto
"If you are not living on the edge then you are taking up too much space." (vancouver2010.com, 21 Mar 2010)
Impairment
He was diagnosed with Ewing's sarcoma, a form of bone cancer, in 1990 at age five. The date of diagnosis was also his mother's birthday. Shortly before his sixth birthday, his right leg was amputated at the knee in order to prevent the disease spreading. After the operation, he began chemotherapy treatment and eventually made a full recovery. (matthallat.com, 30 Oct 2010; vancouver2010.com, 21 Mar 2010)
Other information
RETIREMENT
He announced his retirement from competitive para-alpine skiing in April 2015. (paralympic.org, 13 Apr 2015)

POSITIVE INFLUENCE
He met Canadian ice hockey great Wayne Gretzky as a child, and was inspired by the encounter. "I had the privilege of meeting him when I was sick and undergoing chemotherapy. I have never forgotten that he took the time out of his day to meet with a sick child and I have never forgotten how great that made me feel. I hope I have a fraction of that effect on some of the kids that I get to meet." (alpinecanada.org, 23 May 2013)