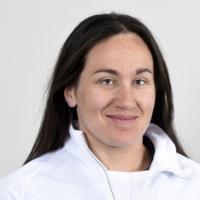 In January 2010 she fractured her pelvis after falling in a World Cup race in Italy. She recovered in time to compete at the 2010 Paralympic Winter Games in Vancouver. (Athlete, 21 Jun 2016; theaustralian.com.au, 22 Jan 2010)

She ruptured the anterior cruciate ligament [ACL] in her knee in 2009. (Athlete, 21 Jun 2016)
Superstitions / Rituals / Beliefs
She has the same start routine before every race. (Athlete, 21 Jun 2016)
Awards and honours
She was named Female Para Athlete of the Year at the 2019 Australian Institute of Sport [AIS] Sport Performance Awards. (nswis.com.au, 11 Dec 2019)

She was presented with the Para Athlete of the Year award at the 2019 Australian Ski and Snowboard Awards. She was the first female to win the award. (revolutionise.com.au, 01 May 2019)

She was flag bearer for Australia at the closing ceremony of the 2018 Paralympic Winter Games in Pyeongchang. (sportaus.gov.au, 18 Sep 2018)
Milestones
She became the first female Para alpine skier representing Australia to win a medal at the world championships by claiming silver in downhill at the 2011 edition in Sestriere, Italy. (SportsDeskOnline, 08 Apr 2019; insidethegames.biz, 17 Jan 2011)
Ambitions
To win an overall World Cup title and to win a gold medal at the Paralympic Winter Games. (paralympic.org,au, 01 Oct 2017)
Impairment
She was born with four separate eye conditions, including cataracts, nystagmus, micropthalmia and glaucoma. (Australian Paralympic Team YouTube channel, 18 Jan 2018; Athlete, 21 Jun 2016; theaustralian.com.au, 12 Mar 2010)
Other information
FIGHTER
She has used mixed martial arts as part of her training and has also taken part in a match, beating her able-bodied opponent by submission. "To win, I have to be close enough to see them. I'd be lying to describe it any way but exhilarating." (news.com.au, 08 Mar 2018)

SOCHI DISQUALIFICATION
She was disqualified from the super combined event at the 2014 Paralympic Winter Games in Sochi for competing in the slalom run with a makeshift visor taped to her helmet. The visor was used to shield her eyes from rain and lights used to illuminate the course, after heavy fog had delayed the start of the event. She had previously used the visor at a World Cup event without incident. Australian head coach at the time, Steve Graham, conceded there were no grounds to contest the disqualification, and said the failure to confirm its legality was a "shared mistake" among Perrine, her guide Andrew Bor, and Australian team staff. (smh.com.au, 12 Mar 2014; foxsports.com.au, 12 Mar 2014; abc.net.au, 12 Mar 2014)