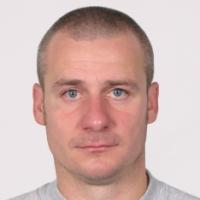 When and where did you begin this sport?
He began Para alpine skiing in 2009 in the Krkonose mountain range in the Czech Republic.
Why this sport?
He took up the sport "to motivate himself and other war veterans".

In 2008 he was given the Karel Kramar Medal for Heroism. (usvitnarodnikoalice.cz, 2014)
Other sports
He is a multiple European champion in Para golf, and has served as president of the Czech Disabled Golf Association [CZDGA]. He has also competed in both Para alpine skiing and shooting Para sport. He represented the Czech Republic in trap at the 2018 World Shooting Para Sport Championships in Lonato del Garda, Italy, and in alpine skiing at the 2018 Paralympic Winter Games in Pyeongchang. (sport.aktualne.cz, 30 Nov 2018)
Impairment
In July 2007 he was serving with the Special Operations Group of the Czech military police in Afghanistan when a rocket-propelled grenade exploded between his legs and blew off his left ankle. He had to have his left leg amputated below the knee. (Athlete, 08 Mar 2018; xman.idnes.cz, 09 Feb 2011)
Other information
FURTHER EDUCATION
He has also studied at the Military University of the Ground Forces in Vyskov, Czech Republic. (xman.idnes.cz, 09 Feb 2011)

OTHER ACTIVITIES
In August 2015 he was elected as the leader of the Dawn National Coalition [Usvit Narodni koalice] party in the Czech Republic. The party dissolved in 2018. (alamy.com, 08 Aug 2015)