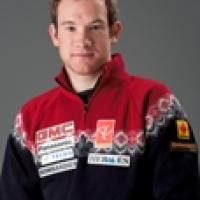 When and where did you begin this sport?
He began skiing at age four.
Name of coach
Jean-Sebastien Labrie [national]
Coach from which country?
Canada
Handedness
Right

He sustained a double compression fracture to his back after crashing during the World Cup finals in Whistler, British Columbia, in 2009. (alpinecanada.org, 24 Jan 2013)
Sporting philosophy / motto
"Ski racing is a mental test just as much as it is a physical one, so don't let other people screw up your race plans." (canski.org, 25 Feb 2008)
Ambitions
To win a medal at the 2014 Paralympic Winter Games in Sochi. (paralympic.org, 30 Nov 2011)
Impairment
He was born without hands and feet. (alpinecanada.org, 24 Jan 2013)
Other information
PROSTHESES
He had prosthetic hands and feet developed by the PERSEUS research group, which allowed him to correctly position his centre of mass over his skis. The Vancouver Orthopedic Group also contributed to the fabrication and the Canadian War Amps paid for the prostheses. (usherbrooke.ca, 30 Mar 2010)