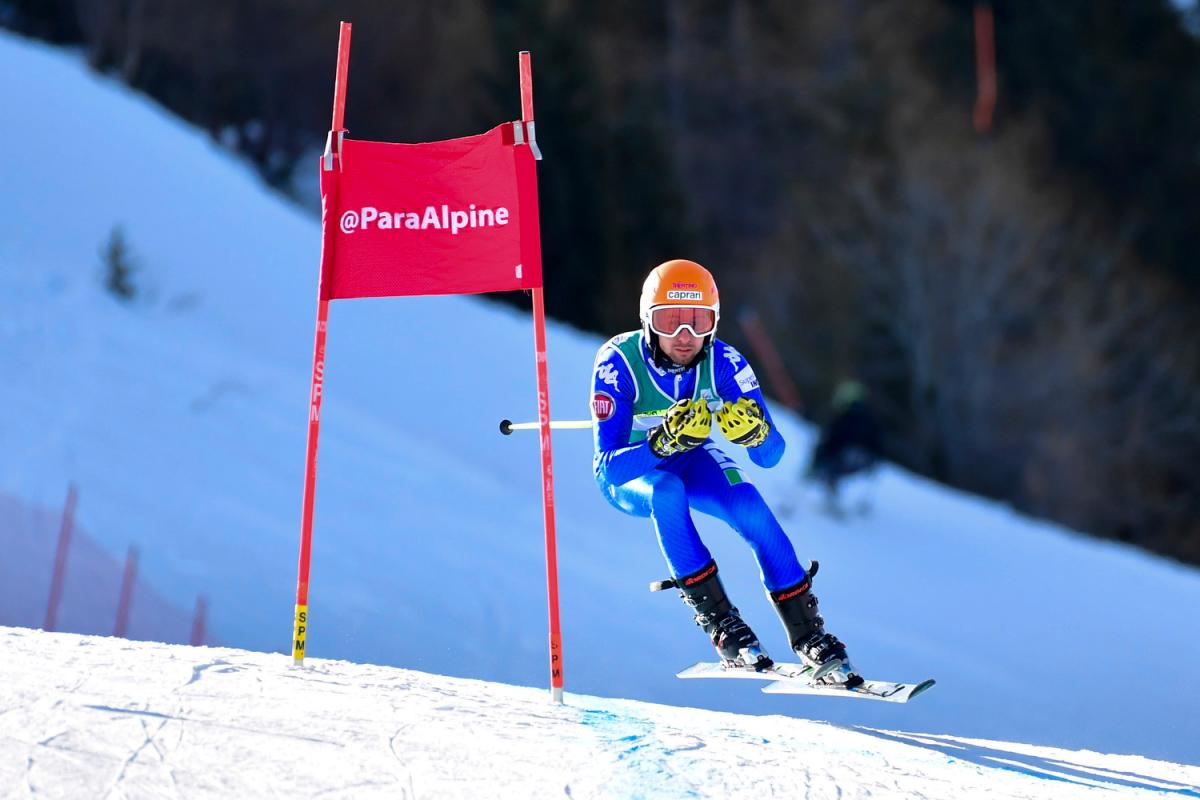 After a short turn-around, Prato Nevoso is picking up the baton for technical events from Veysonnaz, Switzerland as it hosts the second stop of the 2019-20 World Para Alpine Skiing World Cup.

The Italian ski resort will hold the first three slalom races of the season from 15-17 January.

Among the top medal contenders is the Paralympic slalom champion from Italy, Giacomo Bertagnolli, who also won gold in the discipline at the 2019 World Para Alpine Skiing Championships.

A lot has changed for Bertagnolli since he was crowned world champion a year ago. This will make the competition in Prato Nevoso a real test for the visually impaired skier who turns 21 at the end of the week.

After a dazzling performance at the world championships, Bertagnolli missed most of the races at the end of the 2018-19 season, which took him out of the running for the overall Crystal Globe. In addition to missing that competition experience, Bertagnolli is still adjusting to skiing with his new guide, Andrea Ravelli.

Bertagnolli started to skiing with Ravelli three months ago while his former guide and school friend, Fabrizio Casal, has dedicated his time to becoming a ski instructor and is now also guiding Italy’s new female VI skier Chiara Mazzel.

“I decided to change my guide because, first of all, I needed someone faster because I want to improve,” Bertagnolli said.

While still in its early stages, the new partnership has already brought medal results as the duo picked up five silvers in three super-G and two giant slalom races at the World Cup opener in Veysonnaz earlier in January.

“We have to find the right feeling. We already found it, but we have to ski a little bit more together and then we will see,” Bertagnolli said. “I’m happy about the silver medals - they are important medals - but gold is better.”

“Guiding Giacomo is fantastic and I’m happy with the World Cup results, but that’s not enough. We will work harder,” Ravelli agreed.

The five-time gold medallist from Veysonnaz, Canada’s Mac Marcoux and his guide Tristan Rodgers, are sitting out the races in Prato Nevoso to focus on the next World Cup stage to take place in Kranjska Gora, Slovenia next week.

But even with Marcoux off the starting list, Bertagnolli will still face a tough challenge from the world silver medallists in slalom, Miroslav Haraus and his guide Maros Hudik. Slalom is the speciality discipline for the Slovakian pair and they are sure to put up a strong fight after trailing the Italians in all Veysonnaz races.

Eye of the tiger

Zhang Mengqiu’s victory in the women’s standing giant slalom in Veysonnaz was a historical milestone for her country. It was the first time that a Chinese athlete won a gold medal at the World Para Alpine World Cup.

Aside from the gold medal and half round of raclette cheese, the achievement earned Zhang a new nickname from the team’s coach - Tiger - and she will be trying to live up to that fierce name again on the Italian slopes.

Knights of the round table

The absence of the French team in Prato Nevoso will open the gates for a new champion in the men’s standing class. French ski star Arthur Bauchet swept all the golds in Veysonnaz, and now his rivals will be battling it out for points in the overall Crystal Globe race before Bauchet returns in Kranjska Gora.

There are a handful of skiers who could vie for that top spot, including the world silver medallist in slalom Thomas Pfyl of Switzerland and last season’s Crystal Globe winner in slalom, USA’s Thomas Walsh, who nearly made it on the podium in several races in Veysonnaz.

This season’s World Cup has not yet yielded a gold to double world champion in slalom, Jeroen Kampschreur. The Dutch sit skier, who dazzled last year, finished the World Cup opener with a silver and three bronze, a few paces off his fiercest rival Jesper Pedersen.

But unlike the previous season, which was an exciting all-out battle between Kampschreur and the Norwegian overall Crystal Globe winner Pedersen, the field has become wider in 2020 and more challenging for both.

“This shows that every athlete in this group is very fast if he has a good day,” Sikorski said after his win.

Sikorski and de Silvestro will be at the starting gates in Prato Nevoso in the hopes of savouring that victorious feeling once again.

The races in the women’s vision impaired and sitting classes could turn out to be an all German-speaking affair with Austria and Germany expected to dominate the podium.

Meanwhile, Austria’s Veronika Aigner and her sister Elisabeth will be looking to extend their undefeated record by holding off the silver world medallist in slalom, Menna Fitzpatrick of Great Britain.

Live results from the competition will be available on the World Para Alpine Skiing’s website.