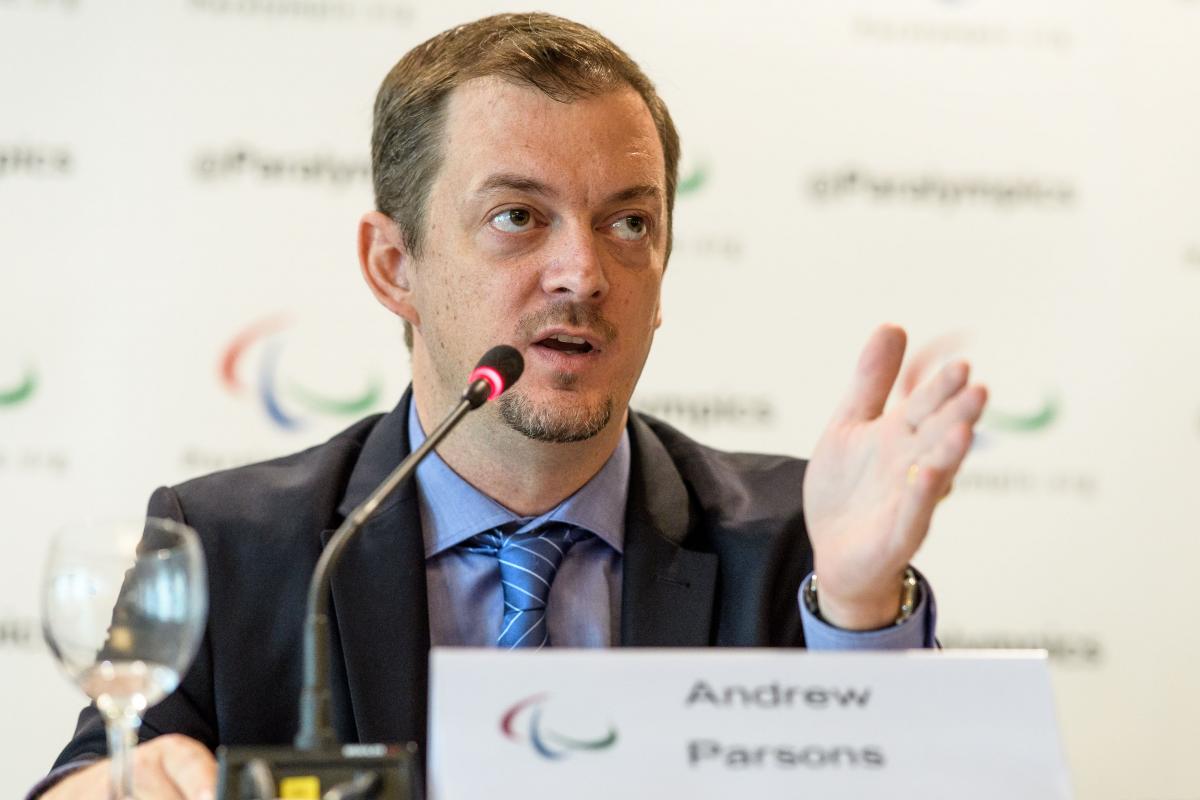 "We hope this decision will be fully respected not just by the RPC but by the Paralympic Movement as a whole. We also hope that this decision will further encourage the RPC to work with its institutional partners, in particular those within Russian authorities, to meet the reinstatement criteria in full so that the next time a major sporting event takes place within the Movement, the RPC can enter its athletes under the Russian flag."

Good morning everybody and thank you for joining us here in the IPC’s home city of Bonn.

On Saturday, the IPC Governing Board was updated by Andy Parkinson, Chair of the IPC Taskforce, on the progress of the Russian Paralympic Committee (RPC) in meeting its reinstatement criteria.

As with previous updates, the IPC Taskforce and IPC Governing Board continue to be impressed by the RPC’s level of co-operation and commitment in doing what it can to have its IPC membership suspension lifted.

Since the reinstatement criteria were published in December 2016, the RPC has taken some highly significant steps to improve its governance, procedures and practices. Such measures have given the IPC greater confidence that the anti-doping system and practices now in place in Russia are in much better order than what they were when we suspended the RPC in August 2016.

Steps taken by the RPC include:

• Introduction of a new whistle blower hotline whereby Para athletes, coaches and officials can report any suspicions they have regarding anti-doping

• Updating and finalising its Anti-Doping Rules

Despite this solid progress, the RPC has still not met two key reinstatement criteria. These are:

Because the reinstatement criteria have not been met in full, the IPC Governing Board approved the IPC Taskforce’s recommendation to maintain the suspension of the RPC.

Following this decision, the Board then discussed whether to allow Russian Para athletes to compete as neutrals at the PyeongChang 2018 Paralympic Winter Games.

With representatives from five continents and six Para athletes on a very diverse Governing Board, the debate was lengthy and the merits of every possibility were deliberated. At the core of all of our thoughts was what impact any decision would have on Para athletes, from both inside and outside of Russia.

In reaching our decision, the Board considered many factors including those that led to the RPC’s suspension.

Back in the summer of 2016, the anti-doping system in Russia was found to be totally compromised, corrupted and open to abuse. What was uncovered was not a minor breach of an obligation, a random failure or the actions of one individual. This was an orchestrated attack on the integrity of sport and an attack that threatened the very future of sport as we know it.

Such findings made it impossible for us to determine which Russian Para athletes were clean and which were not; it was clear that Russia’s participation in Para sport events would severely question the integrity and credibility of sporting competition.

In August 2016 we took measures that were necessary and proportionate to the situation we faced and that were essential to ensure clean sport. We took the correct decision for the Paralympic Movement and Para athletes by suspending the Russian Paralympic Committee.

Now, seventeen months on, we face a different picture in Russia and it is important that once again our decision is necessary and proportionate to what is in front of us.

Although the RPC remains suspended they have made significant progress and we have to recognise this. Russian Para athletes are now regularly tested and are amongst the most scrutinised Para athletes in the world. Under the supervision of WADA, we now have greater confidence that the anti-doping system in Russia is no longer compromised or corrupted. We have also witnessed behavioural and cultural changes by the RPC, which we hope will one day positively influence officials within the wider Russian Federation.

Because of this progress, it is now the IPC Governing Board’s view that allowing Russian Para athletes who meet strict criteria to compete at PyeongChang 2018 as neutrals will not jeopardise our responsibility to ensure clean sport and a level playing field for all athletes.

Under the sport rules for Para ice hockey, an NPA team could not be considered as Russia had missed the opportunity to qualify.

The delegation name Neutral Paralympic Athletes is a slight modification of a name the IPC has been using for this group of Para athletes since September as part of an interim measure we introduced to allow Russian athletes to compete as neutrals in qualification events in snow sports.

Para athletes will compete under the Paralympic flag and in a uniform that has no national identification that relates to Russia. The Paralympic anthem will be played in any ceremony.

Later today, the exceptional eligibility measures that Para athletes and officials must meet in order to be part of the NPA delegation will be published on Paralympic.org, the IPC’s website.

Key points are that Para athletes must meet precise testing requirements, be part of a registered testing pool and have successfully completed anti-doping education. Importantly, any Para athlete or official implicated in any way (knowingly or unknowingly) by the numerous anti-doping investigations in Russia is prohibited from taking part in the Games.

Only licensed Para athletes who meet the criteria in full and have qualified for the Games will be allowed to compete. Under the PyeongChang 2018 Paralympic Winter Games Qualification Guide, only unused slots - some of which have been returned by National Paralympic Committees - will be redistributed to eligible Neutral Paralympic Athletes.

Looking at the current world rankings, and the number of athletes currently participating under the limited interim measure, we estimate that there will between 30 and 35 Neutral Paralympic Athletes competing in PyeongChang.

Following PyeongChang 2018, the IPC Governing Board will meet once again to determine what this decision means for Russian Para athletes competing in summer sports that are governed by the IPC.

We hope this decision will be fully respected not just by the RPC but by the Paralympic Movement as a whole. We also hope that this decision will further encourage the RPC to work with its institutional partners, in particular those within Russian authorities, to meet the reinstatement criteria in full so that the next time a major sporting event takes place within the Movement, the RPC can enter its athletes under the Russian flag.