Over 2,000 young people from across the UK will be recruited to take up volunteer roles 25 Jul 2011 By IPC

"The Young Games Maker programme is a fantastic way to tap into young people’s desire to make their mark and be a part of the biggest sporting event on earth."

With just one year to go until the start of the London 2012 Games, the London Organizing Committee of the Olympic Games and Paralympic Games (LOCOG) today announced details of the Young Games Maker programme.

Over 2,000 young people from across the UK will be recruited to take up volunteer roles vital to ensuring the successful delivery of the Games. Approximately 250 teams of young people, who must be aged 16 or over on 1 July 2012 and under 18 on 1 January 2012 will join the adult Games Makers next summer to help stage the London 2012 Olympic and Paralympic Games.

The Young Games Maker programme supports LOCOG’s commitment to inspire young people to choose sport and leave a volunteering legacy. The programme will allow young people already involved in sport to experience sport at its highest level and explore opportunities that exist outside competition; whilst encouraging those not necessarily involved in sport now to participate and develop their skills.

LOCOG invites organizations such as youth or sports clubs, community and volunteering groups and schools and colleges that are members of the London 2012 Get Set network, to spend the next eight weeks reviewing the roles on offer and encouraging their young people to consider forming a team.

Team leaders such as teachers, coaches and youth group leaders will apply on behalf of their team and support the young people through every stage of selection, training and delivery at Games time. The team approach will ensure the young people are able to focus on their roles and have a great experience during the Olympic and Paralympic Games, and that LOCOG is best able to fulfill its duty of care commitments to the young people involved.

Team sizes range from role to role and can vary between two and 18 young people, with a team leader on board for every 10 young people.

Jean Tomlin, LOCOG HR Director, explained: ‘The Young Games Maker programme is incredibly exciting as it has allowed us to identify a dedicated offering of roles which will allow us to harness young people’s enthusiasm for London 2012 and guarantee 16 to 18-year-olds will have the chance to play their part in the greatest sporting event on earth. With the support of their organization and team leader, they will receive all the help they need to ensure they can make the most of this once in a lifetime chance and bring their very best to the role.’

Recruitment of Young Games Maker teams will be via a specialist or generalist route, with roles being defined by the number of team opportunities, skills required and level of training commitments. Roles recruited through specialist channels, such as National Governing Bodies of sport, include Water Polo Ball Retrievers and Table Tennis Ball Boys. Meanwhile, Generalist applications for roles such as Athlete Kit Team members for Swimming and Athletics and Venue Results Distributors, will be via www.london2012.com/young-games-maker.

In both cases, team leaders will be invited to apply for a specific role which best meets the skills and abilities of their team. They will need to demonstrate that the young people within their proposed team meet role-specific criteria and the required personal attributes.

Key dates and details for the Young Games Maker application process are:

Those interested in the roles available through generalist recruitment will be able to review the roles, the skills required and find out more about the team application process at www.london2012.com/young-games-maker

• 22 September 2011 – 31 October 2011: Generalist applications received via the LOCOG website from team leaders from all recognized organisations such as volunteer organizations, sports clubs, community groups and schools and colleges that are members of London 2012’s Get Set network for the more numerous roles.

Schools and colleges wishing to submit a team application for any Young Games Maker role will need to be a member of the Get Set network. Find out more about the programme that recognizes and rewards schools and colleges for the work they have done around the Olympic and Paralympic Values at www.london2012.com/getset

Minister for Sport and the Olympics Hugh Robertson, said: ‘The Young Games Maker programme will give those aged 16 to 18 a fantastic opportunity to play a role in the world’s greatest sporting event and gain worthwhile experience in volunteering. I would encourage everyone to get involved and gain a valuable addition to their CV.’

LOCOG is working with a range of organisations to encourage applications from the broadest audience possible for the generalist roles on offer. These organizations include; v, Action for Children and National Deaf Children’s Society, REACH, Action for Blind People, Get Set (LOCOG’s own education programme delivered in schools and colleges) and Podium to the higher education sector.

Terry Ryall, CEO of v, The National Young Volunteers Service said: ‘The Young Games Maker programme is a fantastic way to tap into young people’s desire to make their mark and be a part of the biggest sporting event on earth. We are delighted to be working with LOCOG to encourage organizations to work with their young people to submit applications. Everyone involved will give their all to this once in a lifetime opportunity and as a result will be part of a new generation of volunteers inspired to put their experience to use long after London 2012.’

Five teams of young people from schools and youth organizations based in different areas of the UK took part in the pilot Young Games Maker programme for the Volleyball test event, and will also be on hand at the forthcoming Beach Volleyball test event in August 2011. The participation of the young people helped LOCOG to test the field of play processes in advance of running the competitions for real next summer.

In addition to the roles made available through the Young Games Maker programme, LOCOG will be looking for over 600 young people aged between eight and 18 to be involved in opportunities within the Olympic Football competition. Early next year, LOCOG will work with Football venues and their existing Ball Kid schemes to appoint Ball Kids, and will work with Get Set network schools in the host nations and regions to find player mascots and flag carriers. 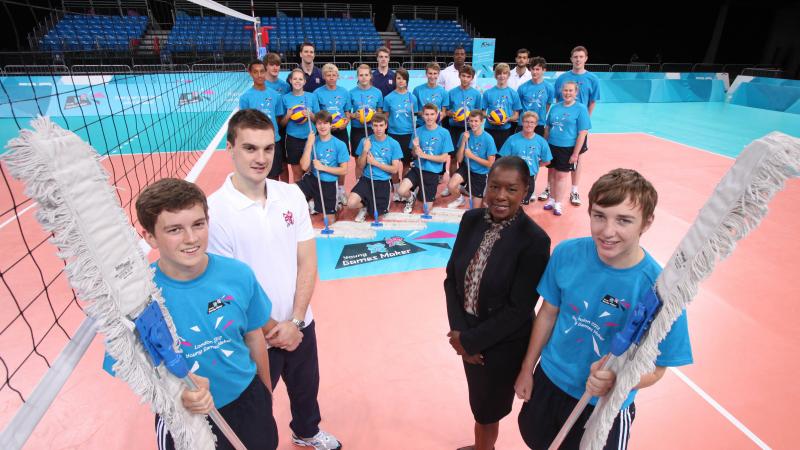