The emblem of the PyeongChang 2018 Paralympic Winter Games

“The Paralympic Winter Games are a once in a lifetime opportunity for the Korean people to see the world’s best Paralympians in action."

The Paralympic Winter Games will take place from 9-18 March next year and will welcome more around 650 athletes across 80 events in six different disciplines.

All ticket holders will have access to the free Games public transport system and also get to enjoy the feast of cultural activities and performances in the Olympic Plaza and around the Olympic Park on the day of their visit.

Highlights will include visually impaired downhill skiers going at speeds of around 120km/h guided only by a sighted guide, huge clashes and outstanding scores in Para ice hockey and tremendous speed and agility in Para snowboard.

The world class performances of Paralympians will redefine attitudes towards impairment in Korea and help educate people about Paralympic sports.

Korean medal hopes lie with the Para sledge hockey team that won bronze at the recent World Para Ice Hockey Championships at the Gangneung Hockey Center. After recovering from injury in 2016, visually impaired alpine skier Jae Rim YANG will also be optimistic of making the podium for the host nation, as will Nordic skier Eui Hyun SIN who finished the 2016/2017 season second in the men’s sitting World Cup rankings.

POCOG President LEE Hee-beom said: "The Paralympic Winter Games are an extremely important part of PyeongChang 2018 and its overall success. We want to ensure that tickets for the Games from March 9-18 are affordable and available to as many people as possible so that the venues can be full of passionate and excited fans who will enjoy this experience, and who will help cheer these amazing athletes onto glory.”

Sir Philip Craven, IPC President, said: “The Paralympic Winter Games are a once in a lifetime opportunity for the Korean people to see the world’s best Paralympians in action. The high performance sport will act as a catalyst to social inclusion in Korea.

“Tickets, which go on 21 August, are great value for money and I am confident that those who attend the Games will, at first, be surprised by what they see. They’ll then be inspired by the outstanding performances of the Paralympians and excited for what the human body can achieve. The Games are not to be missed!”

Coinciding with the 200 days-to-go mark on 21 August, all those living in South Korea will be able to purchase tickets from the official PyeongChang 2018 ticket website. International spectators will be able to buy their tickets to the Games from the designated Authorised Ticket Resellers in their country of residence - more information will be available on the official ticketing website.

The first Paralympic Winter Games were held in Örnsköldsvik, Sweden, in 1976 and last staged in Sochi, Russia, in 2014, attracting a cumulative global TV audience of 2.1 billion people. 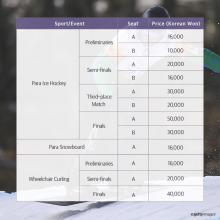 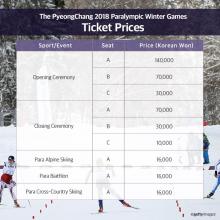