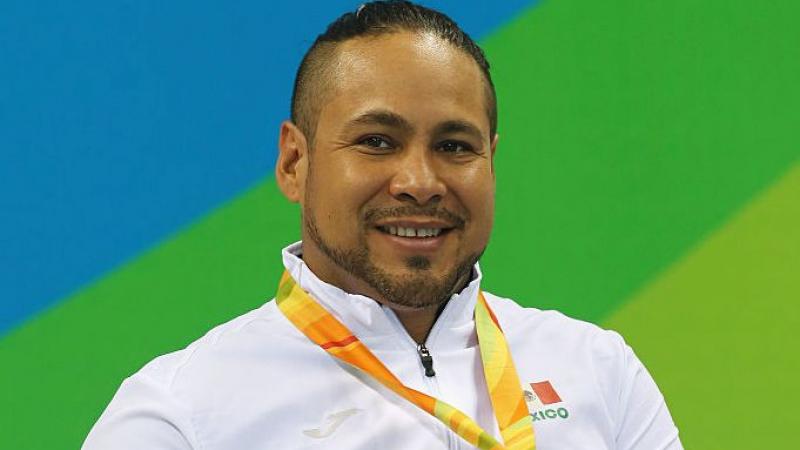 Pedro Rangel has proven to be a 100m breaststroke SB5 specialist throughout his career, having won all of his medals at Paralympic Games and World Championships in that event.

On his Paralympic debut at Athens 2004, the Mexican claimed bronze, repeating that feat twice at London 2012 and Rio 2016. His major achievement came in Beijing, China, in 2008, when he sealed his only Paralympic title.

In 2013, the 37-year-old touched in second at the World Championships in Montreal, Canada, to take silver. He seeks to win another medal on home soil at the Worlds in Mexico City, from 30 September-7 October 2017.

Rangel stood out on the regional stage as well. In 2003, he sealed two silvers at the Parapan American Games in Mar del Plata, Argentina, and followed that up with a gold at Guadalajara 2011 and another silver at Toronto 2015.

Rangel showed top form also in the open water, as he was part of the first team made up of Paralympic swimmers that crossed the English Channel, in 2014.

When and where did you begin this sport?
He began swimming at age 18 in Guadalajara, Mexico.
Why this sport?
While he was on holiday from work he enrolled in a sports club in his hometown of Guadalajara, where he met coach Margarita Hernandez. "By the second day of my swimming lessons she told me that I had talent." He had decided to take up swimming after almost drowning during a family vacation.
Club / Team
Jalisco State: Mexico
Training Regime
He trains twice a day. He combines his pool training with handbiking and sport climbing.

Nicknames
Micha (discapacinet.gob.mx, 09 Jun 2007)
Hero / Idol
French footballer Zinedine Zidane. (discapacinet.gob.mx, 09 Jun 2007)
Injuries
He has struggled with a herniated disk injury since 2008. (corrientealterna.unam.mx, 13 Dec 2020)
Impairment
He lost both his legs at age eight when he tried to jump onto a moving train. (atletasla.com, 09 Mar 2019; informador.com.mx, 16 Nov 2011)
Other information
ENGLISH CHANNEL
In September 2018 he swam the English Channel in a time of 15 hours and 48 minutes. Four years earlier, he swam from England to France as part of a group of Para swimmers called The Honu Para Swim Team. "It was always my dream to swim the channel, and I had an idea of what it was about. Now I realise the magnitude. It was hard but it's so rewarding." (atletasla.com, 09 Mar 2019; ntrguadalajara.com, 25 Sep 2018)