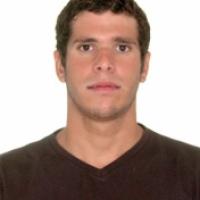 When and where did you begin this sport?
He began swimming at age six.
Why this sport?
He was encouraged to take up the sport by doctors. "I started to practise swimming as a form of physiotherapy. Swimming is one of the best physical therapy methods for my disability and I ended up getting a taste for the sport."
Club / Team
SC Corinthians Paulista [SCCP]: São Paulo, BRA
Name of coach
Leonardo Tomasello Araujo [club, national], BRA

He was named the 2014 Para Sports Achiever of the Year in Manchester, England. (manchester.gov.uk, 30 Apr 2015)
Famous relatives
His wife Liz Johnson has represented Great Britain in Para swimming. She won medals in SB6 100m breaststroke at three consecutive Paralympic Games, claiming silver in 2004, gold in 2008, and bronze in 2012. She also won three gold medals at the 2006 World Championships in Durban, South Africa. (SportsDeskOnline, 17 Jun 2021; Liz Johnson Instagram profile, 20 Mar 2020; globoesporte.globo.com, 24 Apr 2015)
Impairment
He was born with a right clubfoot. He underwent several operations as a child. (cpb.org.br, 02 Jun 2019; Athlete, 02 Dec 2017)
Other information
MOVE TO ENGLAND
He spent two years living in Manchester, England, before moving back to Brazil to focus on training ahead of the 2016 Paralympic Games in Rio de Janeiro. "I lived in Manchester from 2012 to 2014 and it helped me take a step forward. Not in terms of performance, but it made me look at swimming with different eyes. I was starting to dislike the sport and I regained my love for it in England." (gq.globo.com, 21 Dec 2019; jconline.ne10.uol.com.br, 22 Apr 2015)

OTHER ACTIVITIES
He has been elected and served as a member of the World Para Swimming Athletes' Advisory Group [AAG]. He has also worked as a volunteer with Dreamflight, a UK charity that takes children with a serious illness or impairment on trips to Orlando, FL, United States of America. (Facebook page, 06 Dec 2018; dreamflight.org, 01 Nov 2018; paralympic.org, 08 Dec 2017)

FURTHER EDUCATION
He has studied for a degree in leadership and business management at Northumbria University in Newcastle, England. (Facebook page, 06 Dec 2018; pheliperodrigues.com, 01 Feb 2018)