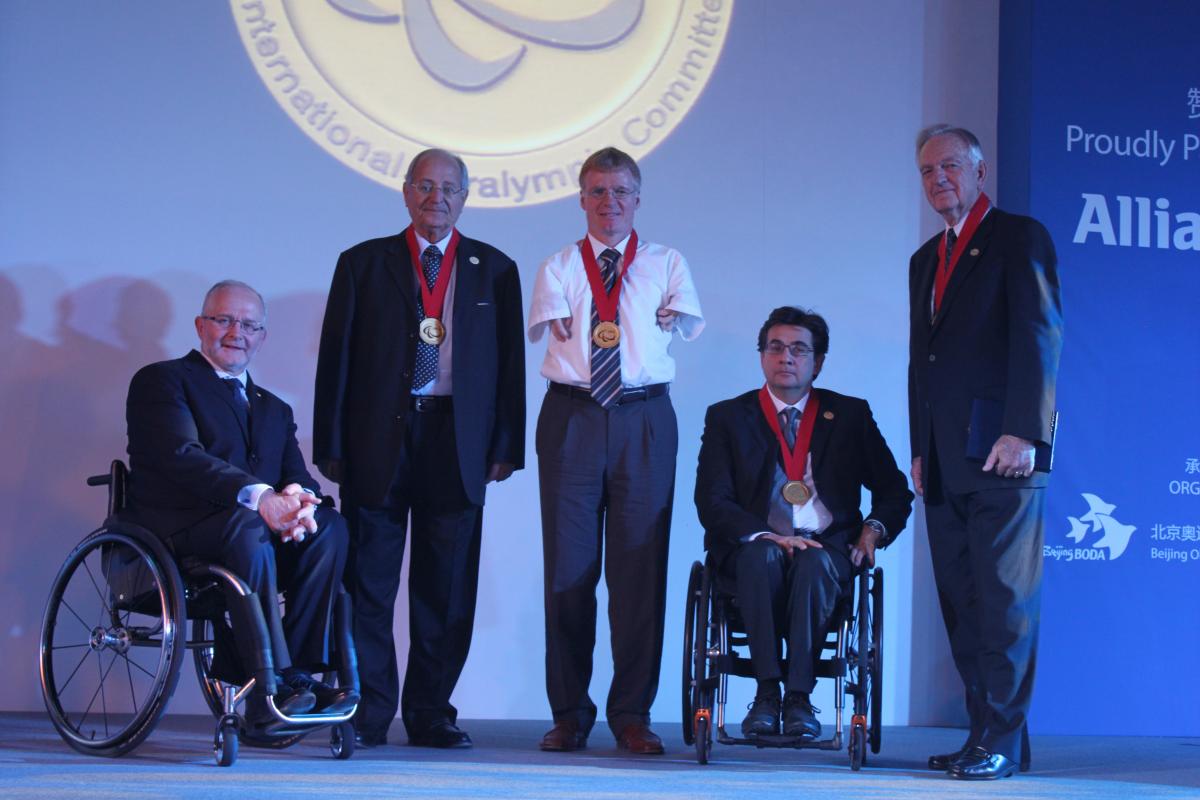 The four recipients of the 2011 Paralympic Order

The International Paralympic Committee (IPC) honoured the top athletes, officials, media and contributors to the Paralympic Movement in the last two years on Saturday evening (10 December) at the Paralympic Awards Gala in the Intercontinental Hotel ballroom in Beijing, China.

The awards are proudly partnered by Allianz, the IPC’s international partner.

In the Paralympic Sport Awards presentation, it was a German double, as the IPC named alpine skier Gerd Schoenfelder the Best Male Athlete and German nordic skier Verena Bentele the Best Female Athlete for their performances at the Vancouver 2010 Paralympic Winter Games.

“I think that’s the best an athlete can do,” Bentele said of her performance in Vancouver. “That’s one of the very, very few moments as an athlete where I did everything right.”

“It feels really good,” Schoenfelder said of winning the award. “It is certainly a big honour to get this wonderful award. After 20 years of serious sport, this award is the perfect culmination.”

Both Bentele and Schoenfelder announced their retirements this year.

Japan’s Ice Sledge Hockey squad was named the Best Team after picking up a shock silver medal in Vancouver, and Ukraine’s Olesksandra Kononova was awarded with the Best Paralympic Games Debut after winning three golds and a silver in Nordic Skiing.

Switzerland’s Christian Egli was named the Most Exemplary Paralympic Games Official after his stellar work as the IPC Technical Delegate for Cross-Country Skiing and assistant for Biathlon in 2010.

The Gala also included the presentation of the IPC Paralympic Media Awards for coverage of the Vancouver Games.

Jeff Crow of Australia’s Sport the Library won the photography category for his image of Australian sit skier Shannon Dallas competing in the Slalom event.

Gary Kingston from Canada’s Vancouver Sun won the written category for his stories on both Canadian athletes and international heroes at Vancouver 2010 – all of which were reported in a thorough, fair, balanced and enlightening manner.

He provided readers with background information on athletes and human interest stories, and capped off his time at the Games with a story on how Canada’s best-ever Paralympics may serve as a launch pad for the next generation.

Sky Sport New Zealand won the broadcast category after capturing the true spirit of the Paralympic Games, in particular with its extraordinary coverage of alpine skier Adam Hall.

The Gala concluded with four dedicated individuals receiving the Paralympic Order – the highest tribute a person connected with the Paralympic Movement may achieve.