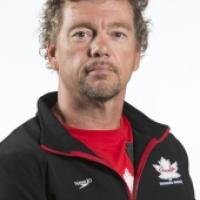 When and where did you begin this sport?
He began swimming in 1983, a year after his accident.
Why this sport?
"It was only one year after [my accident] that I discovered sports and grew a passion to challenge myself. The disability left me lacking the freedom I used to know, the freedom to act on impulse and go wherever my heart desired."
Club / Team
Dynamo Swim Club: Canada
Name of coach
Marianne Alvarez [club]; Craig McCord [national]

Other sports
He represented Canada in para-athletics at the 1988 Paralympic Games in Seoul. He also competed in para-alpine skiing at the 2002 and 2006 Paralympic Winter Games. (paralympic.ca, 2012)
Impairment
He became a double leg amputee in 1982 after he was involved in a workplace accident in Richmond, BC, Canada. "I was emptying out the ice house. There was an auger [machine] behind me and I was chipping away at the ice. I slipped into the auger and it kind of dragged me down." The machine seriously injured his legs and left him with an indention on the right side of his torso. He spent two months in hospital, which was followed by eight months of rehabilitation. (vancouversun.com, 12 Aug 2011)