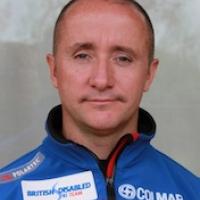 GLACIER RESCUE
In April 2014 his world first attempt to cross Europe's largest glacier, Vatnajokull in Iceland, ended in him having to be rescued after he had became ill and was stranded 50km in the wilderness. After five hours he was rescued and spent two days in hospital to recover from his fever. "We failed to reach our final destination. That doesn't sit well with me, so Mr Vatnajokull we've unfinished business." (metro.co.uk, 21 Apr 2014)

AMBASSADOR
He was an Athlete Ambassador for Great Britain at the 2014 Paralympic Winter Games in Sochi. (paralympics.org.uk, 16 Jan 2014)