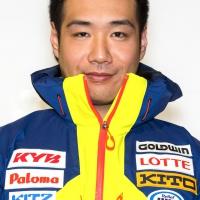 When and where did you begin this sport?
He began skiing at around age nine in Inawashiro, Japan.
Why this sport?
There are a lot of ski fields near his home and he enjoys being on the slopes. He was also influenced to take up the sport after watching the 1998 Paralympic Winter Games in Nagano.
Club / Team
KYB: Japan
Name of coach
Saori Ishii [national], JPN

In 2014 he was presented with the Shiju Hosho [Medal of Honour with the Purple Ribbon] by the Emperor of Japan. (kyb.co.jp, 12 Oct 2016)
Ambitions
To compete at the 2022 Paralympic Winter Games in Beijing. (Ameba profile, 07 Oct 2020)
Impairment
He lost both legs after stepping off a bus and being hit by a truck. The accident occurred in March 1997 while he was on his way home from school. (ndt.tv, 14 Mar 2014)
Other information
ANNIVERSARY GOLD
He won gold in slalom at the 2014 Paralympic Winter Games in Sochi on the 17th anniversary of the accident in which he lost both his legs. "I feel a bit of destiny. My life changed on that day, but I achieved my boyhood goal on the same date." (ndt.tv, 14 Mar 2014)