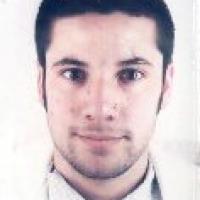 When and where did you begin this sport?
He began skiing at age three, alongside his older sister. "One day I took him under my arm and we rode the ski lift together. Once he understood how it worked, I couldn't keep up with him. He quickly discovered the regular runs were too easy and that is was more fun to slalom between the trees," his mother said.
Why this sport?
As a young boy he tried cross-country skiing and alpine skiing, competing against and beating able-bodied children. At age 11, his alpine skiing abilities were recognised and he was sent to Tignes for coaching under supervision of France Handisport. He took a break from skiing for a while when he was a teenager as he wanted to concentrate on "girls, friends and his scooter". However, he met Jean-Yves Le Meur when he was working for pocket money and was convinced to take up the sport again.

Nicknames
Abraracourcix (france-paralympique.fr, 22 Feb 2014)
Hobbies
Hunting, cycling, mountaineering. (Facebook page, 03 Jan 2015)
Injuries
He underwent surgery on a herniated disc in January 2015. (vivrefm.com, 23 Jan 2015; Athlete, 21 Jun 2016)
Sporting philosophy / motto
"As I am one of the few people in France with my particular impairment, I took a lot of inspiration from able-bodied skiers. I look at their technique, their physical preparation, their choice of materials and their approach to competition. I only got into Para alpine skiing in 2007. Prior to that I always skied with able-bodied people because I wanted to stay among my friends, but after the 2006 Paralympic Winter Games in Turin, I was drawn to join the Paralympic family. There is a greater sense of camaraderie." (le10sport.com, 21 Dec 2012)
Awards and honours
He was named the 2014 Athlete of the Year by French newspaper Voix du Jura. (voixdujura.fr, 01 Jan 2015)

He was flag bearer for France at the opening ceremony of the 2014 Paralympic Winter Games in Sochi. (la-croix.com, 06 Dec 2013)

In December 2012 a piste at the Station des Rousses ski fields in France was named after him in honour of his international achievements in the sport. (voixdujura.fr, 22 Dec 2012)

In 2011 he won the Rising Star [Meilleur Espoir] award at the annual Stars of Sport awards night in France. (voixdujura.fr, 22 Dec 2012)
Impairment
He was born without his left arm. (france3.fr.com, 24 Mar 2010)
Other information
RETIREMENT
He announced his retirement from competitive Para alpine skiing in April 2015. "I cannot envisage myself either in two years at the world championships nor in three years at the [Paralympic Winter] Games. So finally I prefer stopping now. This is something which has been well thought out, it is not finishing on a sudden impulse." (paralympic.org, 29 Apr 2015)

OTHER ACTIVITIES
He has served as president of Vincent Team, an association that aims to help people with an impairment get involved in ski racing. (Athlete, 21 Jun 2016)