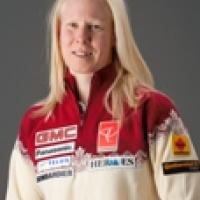 When and where did you begin this sport?
She skied for fun as a child, and began alpine skiing after retiring from goalball in 2005.
Name of coach
Jean-Sebastien Labrie [national]
Coach from which country?
Canada

Hobbies
Sports, camping, spending time with friends and family, goalball, hockey, cycling. (vivianeforest.ca, 2011)
Hero / Idol
Austrian Paralympic skier Sabine Gasteiger. (alpinecanada.org, 24 Jan 2013)
Injuries
She severely damaged ligaments in her right wrist during the downhill at the 2010 Paralympic Winter Games in Vancouver. She had also injured her leg earlier in the competition. She resumed training in mid-2011. (paralympic.org, 01 Feb 2012)
Sporting philosophy / motto
"Always try to reach for the moon, because even if you miss you will reach the stars." (Vancouver, 21 Mar 2010)
Awards and honours
She was the first female athlete from Canada to win gold medals at both the summer and winter Paralympic Games. (vivianeforest.ca, 26 Mar 2013)

She was named as the Canadian Paralympic Committee's Beginner/Debut Athlete of the Year in 2010. (vivianeforest.ca, 26 Mar 2013)

She was named as the Canadian Para-Alpine Ski Team's Breakthrough Athlete of the Year in 2010 after winning five medals at the Paralympic Winter Games in Vancouver. (vivianeforest.ca, 26 Mar 2013)

In 2004 she was awarded the Medal of Honour from the Quebec National Assembly. (vivianeforest.ca, 2011)
Other sports
She has won gold medals in goalball at the Paralympic Games. (vivianeforest.ca, 26 Mar 2011)
Ambitions
To compete at the 2014 Paralympic Winter Games in Sochi. (paralympic.org, 01 Feb 2012)
Impairment
She has had impaired vision since birth. "When I ski, I barely see something quite dark in front of me and that’s my guide. Nothing is defined." She also has tunnel vision which causes vertigo, especially in poor weather conditions. "I don't feel anything around me. It's extremely difficult to stand on your skis and not feel like the whole world is turning around you." (paralympic.org, 01 Feb 2012; vivianeforest.ca, 01 Jan 2013)
Other information
RETIREMENT
She announced her retirement from competition on 29 March 2013. (paralympic.org, 03 Apr 2013)


NEW GUIDE
In mid-2011 she started training with a new guide, Chloe Lauzon-Gauthier, as her previous guide Lindsay Debou retired after 2010 Paralympic Winter Games in Vancouver. "I have to readjust with that person and basically start from scratch, and build all that confidence and trust." (paralympic.org, 01 Feb 2012; vivianeforest.ca, 01 Jan 2013)

MOTIVATIONAL SPEAKER
She has spoken to over 5,000 students at more than 120 schools in Quebec, Canada, sharing her life story and the challenges she has overcome as an elite athlete with a visual impairment. (vivianeforest.ca, 01 Jan 2013)

PROFESSION
In addition to being an athlete and motivational speaker, she is also a massage therapist. (vivianeforest.ca, 01 Jan 2013)