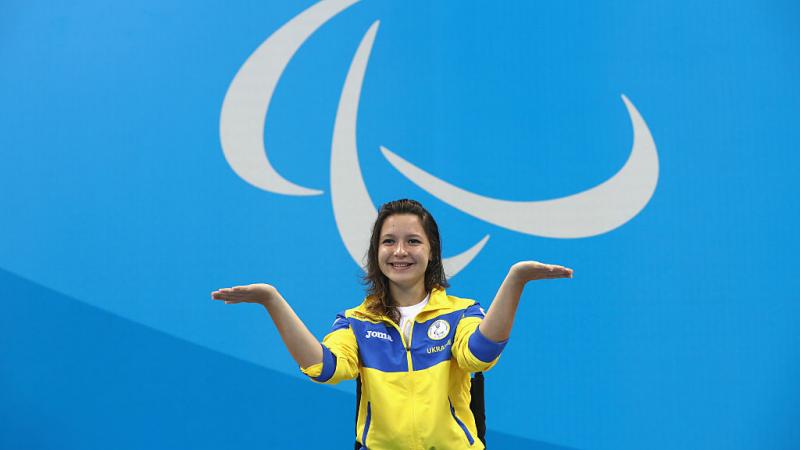 Para swimming fans can be in doubt about the potential of Yelyzaveta Mereshko to deliver a major upset at the Rio 2016 Paralympic Games.

The Ukrainian beat Great Britain’s Eleanor Simmonds in the 400m freestyle S6 in an exhilarating race at the 2015 IPC Swimming World Championships in Glasgow, Great Britain.

Simmonds had one the event at every World and Paralympic Games since Beijing 2008, but that did not matter to Mereshko, taking the world title from her idol at her first Worlds and setting up one of the races of 2016.

Mereshko won a further two world titles in the 50m and 100m freestyle S6, to add to her first two European titles from 2014.

Not only that the relative newcomer, who only began swimming competitively in 2013, set two new world records in the 50m and 100m freestyle in Glasgow.

However, going into the 2016 Euros the 400m freestyle mark still belonged to Simmonds. Inher absence, Mereshko claimed that accolade too, going on to win four titles in total.

By the time Rio 2016 rolled around, the stage was set for Mereshko and Simmonds to face each other on the biggest stage possible. The Ukrainian took the 400m freestyle crown and another two freestyle events, winning the 100m in a world record time. However the Brit was not to be outdone, retaining her 200m individual medley title.

Mereshko, who enjoys embroidery to keep her mind occupied in between competing and training, is also a computer engineering student.

When and where did you begin this sport?
She began swimming in 2003 at the Youth Sports School No.6 in Kherson, Ukraine. She took up Para swimming in 2011.
Why this sport?
"My mother took me swimming so that I could improve my health. The swimming pool was not far from my house and it was very convenient for us to visit. Then I was invited to take part in children's tournaments, where I become infected with the desire to compete."
Club / Team
Invasport: Kherson, UKR
Name of coach
Ella Benedyk [personal], UKR, from 2004

She was named among the six best Ukrainian athletes of 2018 at the Sports Constellation annual award ceremony held by the Ministry of Youth and Sports of Ukraine. (isport.ua, 21 Dec 2018)

In recognition of her performance at the 2016 Paralympic Games in Rio de Janeiro, she received the Order for Merit [third grade] in Ukraine. (president.gov.ua, 04 Oct 2016)

She was named the 2016 Female Para Swimmer of the Year in the Swammy Awards, run by the Swimswam swimming news website. (swimswam.com, 30 Dec 2016)

She has received the title of Honoured Master of Sport in Ukraine. (dsmsu.gov.ua, 31 Dec 2020)
Milestones
At the 2016 Paralympic Games in Rio de Janeiro, she became the first female athlete representing Ukraine in any sport to win four gold medals at a single edition of the Paralympic Games, and the first female swimmer representing Ukraine to win four Paralympic gold medals. (SportsDeskOnline, 03 Aug 2021)
Impairment
She has a malformation of the spinal cord. (Athlete, 13 Aug 2018)

Seven golds in seven days for Dias at Glasgow 2015