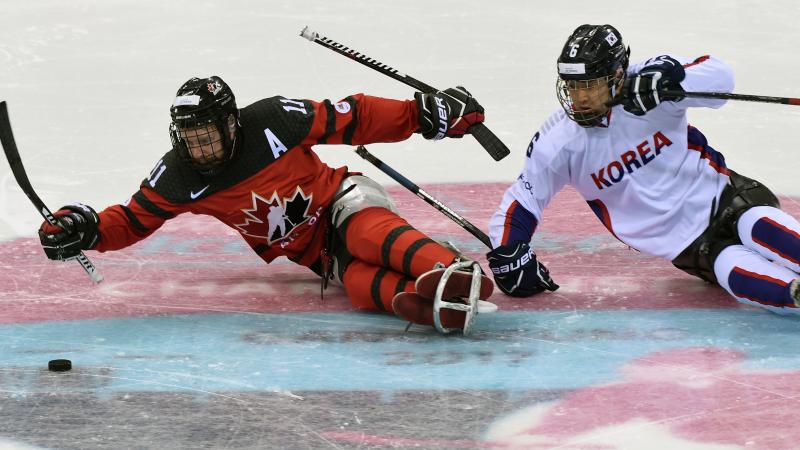 Adam Dixon joined the Canadian national team in the 2006-07 season and has since been important in breaking the puck out of Canada’s own zone, as well as providing veteran leadership. The two-time Paralympic medallist helped Canada reach the final against USA at the 2018 Games, where his side lost in a heartbreaking overtime battle.

At the 2017 World Para Ice Hockey Championships in Gangneung, South Korea; Dixon recorded four goals and 14 assists, and was awarded the Best Defenceman, as Canada won.

He was Canada’s top scorer with four goals at Sochi 2014.

Dixon was diagnosed with bone cancer in his right leg when he was 10 years old. Despite his young age, he was involved in high-level hockey, and the transition to just automatically stop playing the game that he loved was difficult.

Once recovered, Dixon tried playing goalie in stand-up hockey but realised it was not going to work out. A family friend had suggested Para ice hockey while he was still recovering from cancer, and at age 11, he made the switch to the sledge and has developed into one of the game’s top defencemen who can also score from the back-end and create opportunities for his teammates.

When and where did you begin this sport?
He began playing Para ice hockey at age 11 with the Elmvale Bears club in Ontario, Canada. He switched from able-bodied ice hockey following the operation on his leg.
Why this sport?
He grew up playing ice hockey and naturally found Para ice hockey appealing following his treatment for bone cancer. "The biggest challenge was getting used to balancing, learning how to take the angles and not skating backwards."
Club / Team
Elmvale Bears: Canada
Name of coach
Ken Babey [national], CAN
Preferred position / style / stance / technique
Defence

Year
2006
Competing for
Canada
Opponent
Germany
Location
Kelowna, BC, CAN

In 2014 he had a street, Adam Dixon Way, named after him in Midland, ON, Canada. (simcoe.com, 30 Apr 2014)
Ambitions
To win a gold medal at the 2022 Paralympic Winter Games in Beijing. (hockeycanada.ca, 08 Sep 2021)
Impairment
He was diagnosed with Ewing's sarcoma at age 10. The cancer led to the removal of his right tibia, which was replaced with a donor bone, a metal plate and multiple screws. (Athlete, 06 Mar 2014)
Other information
POST-PYEONGCHANG BREAK
He took a three-year break from competitive Para ice hockey after winning a silver medal at the 2018 Paralympic Winter Games in Pyeongchang. He returned to the squad in 2021 ahead of the 2022 Paralympic Winter Games in Beijing. "Turns out life is not always in your control and I wasn't doing what I was planning on doing anyway, so I might as well go back to what I was good at. I am not going to be the person I was and it's going to take a while to get back to that. I hope I can still do that, like I used to." (hockeycanada.ca, 09 Sep 2021)