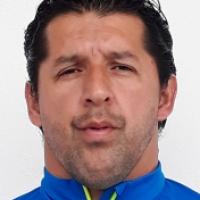 When and where did you begin this sport?
He began the sport at age 13 at the National Rehabilitation Institute in Mar del Plata, Argentina.
Why this sport?
He was spotted by coach Miguel Miranda. "He was the first to have trained me, and I started discovering a passion."
Name of coach
Carlos Alberto Rodriguez [national]
Coach from which country?
Argentina
Coach from what year?
2003
Training Regime
He has three training sessions a day, six days a week, at the National High Performance Centre [CENARD] in Buenos Aires, Argentina.

In 2009 he won the Olimpia de Plata award in Argentina. (Athlete, 26 Nov 2010)
Ambitions
To win gold at the 2020 Paralympic Games in Tokyo. (buenosaires.gob.ar, 06 Aug 2020)
Impairment
He was born with arthrogryposis, which causes muscle weakness in his lower body. He has undergone more than 30 surgeries related to his impairment. (clarin.com, 08 Aug 2019; ole.com.ar, 10 Dec 2012; enganche.com.ar, 01 Oct 2019)
Other information
RETIREMENT AND RETURN
He retired from the sport in 2013 due to personal reasons and work commitments. In early 2018 he decided he wanted to return and called coach Carlos Alberto Rodriguez. "Since then, I did not stop training." He plans to retire after the 2020 Paralympic Games in Tokyo, and chose to continue training for another year after the Games were postponed until 2021. He wants to remain in sport after retiring from competition. "In the future I would like to become a sports official, but I don't want to be a coach." (enganche.com.ar, 01 Oct 2019; infobrisas.com, 09 Sep 2019; Esto es sin Var YouTube channel, 26 Mar 2021)