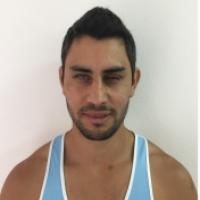 Why this sport?
He was invited to try athletics at a school for the visually impaired. "I had always played football. I had no idea about athletics, but I had speed, so I started to run and they immediately took me to a tournament in Mar del Plata [in Argentina]. Being there helped me a lot in life because I was with children with other impairments, some who lacked their legs or arms. I have everything, except being able to see, so what was I going to complain about?"
Club / Team
Racing Club de Avellaneda: Buenos Aires, ARG

He sustained an injury to his ankle in the early part of 2011. (prevenirlaceguera.blogspot.com, 09 Jan 2011)
Sporting philosophy / motto
"Sometimes you suffer a lot, but when you finish a tournament or climb on the podium, that part is beautiful. And you say it is worth every effort " (MDS Nacion, 03 Dec 2014)
Impairment
He began to lose his vision at age 16 and was completely blind two years later. (weblogs.clarin.com, 13 Mar 2012)
Other information
MUSIC VIDEO
Argentinian band Eruca Sativa used Acosta's life experiences in the music video for their song 'Antes de que vuelva a caer' [Before falling again]. "We wanted to tell a real life story in images, which reflected a message of overcoming difficulties. We found it in Alexis Acosta," a member of the band said. (tn.com.ar, 25 Apr 2014)

DOCUMENTARY
In 2009 he made a short film called 'Alexis, a life without barriers', which tells his story and how he was able to overcome the difficulties he encountered during his childhood. The film was shown in several cinemas in Buenos Aires, Argentina. (laarena.com.ar, 03 Jan 2011)

CHANGE OF DISCIPLINE
He began his career in athletics running road marathons. He switched to sprinting after his coaches were impressed by the times he could produce over shorter distances.
(deporteadaptado.spaces.live.com, 30 Sep 2009)