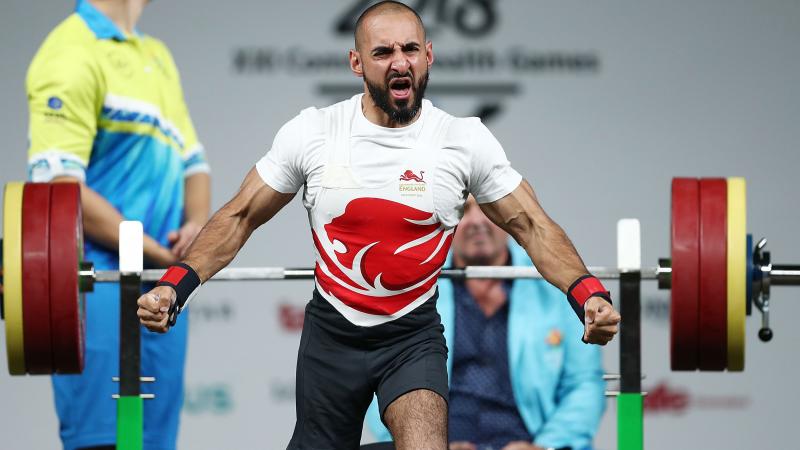 Great Britain’s Ali Jawad is determined to show the world that anything is possible. The road for the Lebanon-born lifter has been paved with challenges, but he has always overcome them.

In 2017, Jawad had his longest Crohn’s flare up since being diagnosed with the disease in 2009 and could not compete at the Mexico City 2017 World Championships.

He underwent a long recovery process and focused his training on getting himself back to full fitness. Jawad produced an epic comeback at the Gold Coast 2018 Commonwealth Games, taking a much-celebrated bronze in the men’s lightweight.

Only one month later, he won the European title in the men’s up to 54kg in Berck-sur-Mer France, after clearing the bar at 165kg.

This was just the latest of many challenges he has overcome.

The night before he was due to compete at his maiden Paralympic Games in Beijing, China, in 2008, Jawad fell ill. He still competed, finishing ninth. But he was later diagnosed with Crohn’s.

Four years later, after a devastating series of events at his home Games at London 2012 denied him a medal, he suffered a flare-up of his condition which could have put him out of action for good.

However, Jawad was determined not to let that ruin his road to Rio 2016 and, after controlling his diet and training hard, he stepped onto the podium at two regional Championships in 2013.

His moment in the sun came at the 2014 World Championships in Dubai, United Arab Emirates, where his commitment paid off with a world title.

However there was trouble on the horizon once again for Jawad. In Dubai, Egypt’s Sherif Osman announced that he was moving up to Jawad’s weight category.

But Jawad refused to be distracted by the Egyptian’s growing confidence.

In 2015, he stormed to the European title and also won gold at the Americas Open Championships, placing him firmly in the running for his first Paralympic medal.

By the time Rio rolled around Jawad was ready for action.

He lifted 190kg to equal his world record lift from the 2014 World Championships, claiming silver and putting to rest the disappointments of the previous two Paralympic Games.

Jawad had still finished behind Osman, but the joy of finishing on the Paralympic podium was clear for everyone to see.

When and where did you begin this sport?
He began powerlifting at age 16 in London, England.
Why this sport?
Friends encouraged him to go to a local gym and a coach there believed he had the potential to compete at an elite level.

Nicknames
The Showman (telegraph.co.uk, 10 Apr 2018)
Hobbies
Reading sports autobiographies, supporting English football club Liverpool. (paralympic.org, 13 Jun 2017; Twitter profile, 06 Mar 2019)
Hero / Idol
Egyptian powerlifter Sherif Othman. (paralympic.org, 24 Mar 2014)
Superstitions / Rituals / Beliefs
He listens to the soundtrack from the film 'Rocky' before every competition. Before lifting he stands on the bench and stares at the bar for 20 seconds. "The ritual makes me focus and get into the zone. On the platform, it is me against the bar and nothing else can affect my performance." (paralympic.org, 13 Jun 2017, 18 Oct 2016)
Sporting philosophy / motto
"Why be the best when you can be the greatest?" (Twitter profile, 20 Mar 2015)
Awards and honours
He was named Sportsman with an Impairment of the Year at the 2014 and 2015 Leeds Sports Awards in England. (yorkshireeveningpost.co.uk, 14 Mar 2015; paralympics.org.uk, 03 Mar 2014)

He was named the International Paralympic Committee [IPC] Athlete of the Month for April 2014. (paralympic.org, 09 May 2014)

He was named British Weightlifting's Powerlifting Athlete of the Year in 2013. (Facebook page, 20 Nov 2018)
Other sports
He was a talented judoka in his early teens. However, there was no judo category for his impairment in the Paralympic Games so he decided to concentrate on powerlifting instead. (yorkvision.co.uk, 09 Oct 2012; bbc.co.uk, 04 Aug 2011)
Ambitions
To win a gold medal at the 2020 Paralympic Games in Tokyo. (yorkshireeveningpost.co.uk, 23 Feb 2019)
Impairment
He was born without legs. (bbc.co.uk, 04 Aug 2011)
Other information
BOARD MEMBER
He was appointed to the Commonwealth Games England board ahead of the 2022 Commonwealth Games in Birmingham, England. "I'm delighted to be joining the Commonwealth Games England board at such an exciting time for the organisation. Representing England at Delhi 2010, Glasgow 2014 and on the Gold Coast [in 2018] have been some of the highlights of my career. It's a real privilege to be offered the chance to be able to give something back to the organisation. I look forward to ensuring we've left no stone unturned to give our team the best possible chance in Birmingham.” (teamengland.org, 31 Jul 2018)

CROHN'S DISEASE
He has been affected by Crohn's disease since 2008, and had part of his intestine removed in 2010. The illness also kept him out of competition for 18 months following the 2016 Paralympic Games in Rio de Janeiro. He returned to training in 2018, linking up with coach Duncan Ogilvie at the University of East London [UEL] in England, and went on to claim bronze at the 2018 Commonwealth Games in Gold Coast, QLD, Australia. "I'm truly lost for words. It was a miracle to even get here, but to come away with a medal is beyond everything I expected. Eighteen months battling Crohn's disease, thinking my career was over. Thank you to everyone that wished me support. It means the world to me." Soon after that performance he was once again affected by the condition after the medication he was taking did not help him, however he is determined to fulfil his dream of winning a Paralympic gold medal. "I am risking my health for this [the gold medal], but I had to think about the dreams I had when I was about six years old. The dreams I had then I still have now and I have to fight for them." (Twitter profile, 09 Apr 2018; bbc.co.uk, 09 Apr 2018; uel.ac.uk, 16 Feb 2018; tottenhamjournal.co.uk, 03 Apr 2013; yorkvision.co.uk, 09 Oct 2012; bbc.co.uk, 04 Aug 2011; yorkshireeveningpost.co.uk, 23 Feb 2019)

CLEAN SPORT ADVOCATE
He served as a UK Anti-Doping Athlete Commission member. "Throughout my career, clean sport has underpinned everything. Everything I do, everything I want my colleagues and competitors to do. Competing cleanly and fairly is the foundation of sport, maintaining its integrity and the reason millions of people around the world love it." (alijawadgb.co.uk, 13 Sep 2018)

FROM LEBANON TO ENGLAND
Born in Lebanon, at age six months his parents relocated the family to London, England. "It was hard enough to bring up kids that didn't have a disability, let alone someone who did. So my parents took the decision that, in order for me to have a normal life, we needed to move away. England was our best option as they provided prosthetic limbs which enabled me to walk." (yorkvision.co.uk, 09 Oct 2012; bbc.co.uk, 04 Aug 2011)