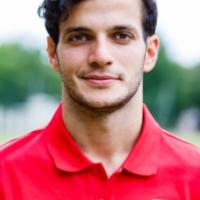 When and where did you begin this sport?
He took up Para athletics in 2011 and began competing two years later. He was motivated by watching a television programme on Para athletes who were preparing for the 2012 Paralympic Games in London.
Why this sport?
"I've always been athletic. Football used to be my sport, I was a goalkeeper. I wanted to do something that I could not do before. It was important for me to tackle a whole new challenge. A friend called and told me about Para sports. There was an athlete, [German-born Para athlete] Vanessa Low. She lost both legs in an accident and got her life back through Para athletics. She is super successful. I figured I have my impairment since birth, I can do it. Then I reached for the phone, contacted Ralf Otto from the PSC Berlin, told him about it and he then introduced me to the sport."
Club / Team
PSC Berlin: Germany
Name of coach
Ralf Otto [club], GER

Nicknames
Ironman, Candyman [he works in the confectionery industry]. (rbb24.de, 24 Jul 2018; idm-leichtathletik.de, 21 Jun 2015)
Hobbies
Going to the cinema, spending time with family and friends. (Athlete, 19 Nov 2019)
Memorable sporting achievement
Setting a European record in the T61 200m at the 2019 Handisport Open in Paris, France. (Athlete, 19 Nov 2019)
Injuries
He broke his collarbone in 2013 and was unable to compete for eight months. (idm-leichtathletik.de, 21 Jun 2015)
Sporting philosophy / motto
"Discipline, commitment, self-respect." (idm-leichtathletik.de, 21 Jun 2015)
Awards and honours
He was named the 2018 Berlin Sportsman of the Year in Germany. (Instagram profile, 18 Sep 2019; rbb24.de, 08 Dec 2018)
Ambitions
To compete at the 2020 Paralympic Games in Tokyo. (teamdeutschland-paralympics.de, 08 Mar 2021)
Impairment
He was born without shin bones and knees. His lower legs were amputated at a young age. "Initially I always only wore long trousers and never showed my prostheses because I saw the pitiful looks in people. It hurt me a lot. But since starting sport, I get glances of recognition and respect, which strengthened me." (berliner-zeitung.de, 21 Nov 2019; morgenpost.de, 31 Aug 2014; spiegel.de, 30 Oct 2013)
Other information
BUSINESS
In 2013 he began running a wholesale confectionery shop in Berlin, Germany, with his brother Osman. "We opened the shop together. When I became more involved with the sport, like training four times a week or going to a training camp, he always motivated me and took over my work in the shop. He is my biggest supporter." (Sweetstore Lacin GbR Instagram profile, 20 Jul 2019; spiegel.de, 21 Aug 2018; blog.unitee.eu, 03 Dec 2015)