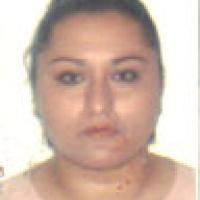 Why this sport?
Mexican Paralympic champion Estela Salas moved near where she lived and invited her to take part in a competition. After seeing she had potential, she was invited to participate in regional competitions where she was noticed by national coaches. At first she did not want to compete nationally, but her family convinced her to participate.
Name of coach
Ivan Rodriguez Luna [national]; Xiomara Rivero [personal], CUB

In 2011 she received the Olmeca Wrestler Award [Luchador Olmeca] from the Mexican Sports Confederation. (deporte.gob.mx, 2015)

She lit the cauldron at the opening ceremony of the 2011 Parapan American Games in Guadalajara, Mexico. (proceso.com.mx, 08 Sep 2016)
Famous relatives
Her father was a professional baseball player in Mexico. (codigoinformativo.com, 10 Aug 2011)
Ambitions
To set a world record and win gold at the 2020 Paralympic Games in Tokyo. (horizontedigital.com.mx, 28 Apr 2020; marca.com, 20 Mar 2018)
Impairment
She was hit by a drunk driver and had to have her left leg amputated in 2004. (proceso.com.mx, 08 Sep 2016)
Other information
COACHING AND COMPETING
From 2016 to 2018 she served as director of the Sports Institute in Veracruz State, Mexico. While working in the role she realised she still had a passion for competing. "I have plans not only to be a coach, but also to continue training in the field that is my passion. If I have the patience to be a coach, there may be something bigger to transmit that knowledge. My project is broader and more complete. That is what I am preparing for." (cronicadexalapa.com, 24 Apr 2020; alcalordeportivo.com.mx, 02 Dec 2018; diarioeyiplanta.com, 01 Dec 2016)

MEDAL INSPIRATION
Winning the first Mexican gold medal at the 2016 Paralympic Games in Rio de Janeiro was an important milestone in her life. "I felt blessed with my medal, because it was the team's first in Rio, and it was gold. It caused me to have a leading voice, and received many acknowledgements and awards. I never thought about being a role model for anybody, but it is nice to be an inspiration for many young athletes." (mugsnoticias.com.mx, 09 Oct 2016)

FURTHER EDUCATION
She has a degree in international business and customs at the Superior School of International Commerce in Veracruz, Mexico. She also has a technical diploma in customs procedures. (Facebook profile, 21 Feb 2021)