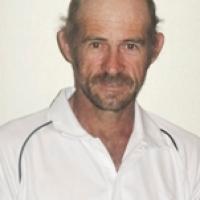 When and where did you begin this sport?
He took up the sport at age 39 in Adelaide, SA, Australia.
Why this sport?
He had firearms experience growing up in rural Australia, and was an occasional pistol shooter before he tried rifle shooting in 1993. "They gave me a rifle to try at this competition and within a year I was in the top shooting grade. I’ve got a natural ability to know how to use a rifle."

Hero / Idol
Australian golfer Greg Norman, Australian motor racing driver Peter Brock. (paralympic.org.au, 2012)
Sporting philosophy / motto
"Shooting is the only game where there is direct cross over from Olympic and Paralympic events. When I lie on the ground, there is no difference between a person who has a broken back like me, and an able-bodied person. Making sure the Paralympic Movement is seen as equal to able-bodied sport is important. Sometimes people look down on you and say, 'Oh, you're only champion in disabled shooting' like it's not as good. And I say, 'I don't need any help mate. I won the able-bodied event as well.'" (paralympic.org, 12 Apr 2012)
Impairment
He broke his back in 1982 in a motorbike race. The accident resulted in instant paralysis. "One bloke who helped me very much was a man who was the oldest living paraplegic in Australia and he gave me a few words on how to live. I still live by some of the things he told me." (paralympic.org, 10 Apr 2012)
Other information
PASSED AWAY
He passed away in a quad bike accident on his farm in Australia in March 2015. (couriermail.com.au, 18 Mar 2015; brisbanetimes.com.au, 18 Mar 2015)

CATTLE FARMER
He owned a 64,000 acre cattle farm in Blackall, around 1000km west of Brisbane, QLD, Australia. He was well known in Australia's beef community for his genetic cattle breeding. "I've got three studs across 64,000 acres, so I use a four-wheel motorbike to get around. I can get on without any modifications, the cattle behave well around it, and so I've stuck with it. I've also designed my own gates. All my gates can open from either side, they swing both ways. And every gate on my property I can open single handed with a special latch that I made, that I won the Queensland Invention of the Year award with. Everything I do, I've got to know if I'm going to be able to get around, so I make things easier to live and work here." (paralympic.org, 14 Apr 2012)