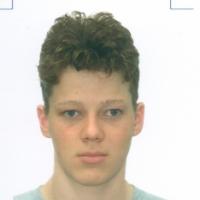 When and where did you begin this sport?
He began swimming at age seven.
Why this sport?
"My muscles were getting really tight so the doctors suggested I should get into sport and it was either swimming or horse riding so I just picked swimming and then it went from there."
Club / Team
Arena Swim Club [AUS] / Western Australia Institute of Sport [AUS]:
Name of coach
Simon Redmond [Arena], AUS
Training Regime
He spends 28 hours per week in the pool and a further two hours per week in the gym.

Hobbies
Playing video games, going to the beach. (swimming.org.au, 15 Sep 2019)
Memorable sporting achievement
Competing at the 2018 Pan Pacific Championships in Cairns, QLD, Australia. (swimming.org.au, 15 Sep 2019)
Hero / Idol
Australian wheelchair racer Kurt Fearnley, Australian Para swimmers Katrina Porter and Katherine Downie. (paralympic.org.au, 01 Jan 2019)
Sporting philosophy / motto
"In a team game you can always find someone else to blame other than yourself, but in swimming it's only you. If you don't get the time you want you can't blame anyone else, which helps you realise if you did something wrong and helps you get better." (communitynews.com.au, 22 Apr 2016)
Awards and honours
He was named 2020 Swimming Western Australia [WA] Multi-Class Swimmer of the Year. (arenaswimclub.com.au, 24 Jun 2020)

In 2019 he was named Sportsman of the Year at the Curtin University Sports Awards in Perth, WA, Australia. (news.curtin.edu.au, 07 Nov 2019)

In 2018 he was named Australian Institute of Sport [AIS] Discovery of the Year at the Swimming Australia annual awards in Melbourne, VIC, Australia. (olympics.com.au, 29 Oct 2018)
Ambitions
To compete at the 2020 Paralympic Games in Tokyo. (paralympic.org.au, 01 Jan 2019)
Impairment
He was diagnosed with cerebral palsy as an infant, which later affected his legs. (communitynews.com.au, 22 Apr 2016; telethon7.com, 31 Oct 2011)
Other information
EARLY DAYS
As a child he was involved in a number of able-bodied sports alongside his twin brother Adam, which he says helped later in his sporting career. "Everything that Adam does, I also do. So we sort of built the expectation that nothing is different about me, which is good because then you say, 'Wow, I can do everything that these kids can do and there's nothing different or special about me'. So I learned and developed with Adam. This really helped me because I was treated the same and so learned the same lessons that everyone does in sport, which is resilience and character building." (Inclusion Solutions YouTube channel, 18 Dec 2019)

TELETHON
He was part of the 2011 Little Telethon Stars in Australia. He say his telethon appearance played a significant role in helping him pursue his elite sporting dreams. In 2019 he returned to the show. "Everything was just so positive and it's really shaped me. It had a huge impact. My identity, to an extent, is being a disabled sportsman, but Telethon really helped me accept that that's OK. The theme from my year was 'I can', so it was focusing on everything I could do rather than what I couldn't. Learning to embrace that different side of me and my sport set me up really well to have the elite sport mindset I have. It's a really fond memory and it's incredible to remember how caring and joyful everyone was around the scenes." (thewest.com.au, 28 Oct 2019)