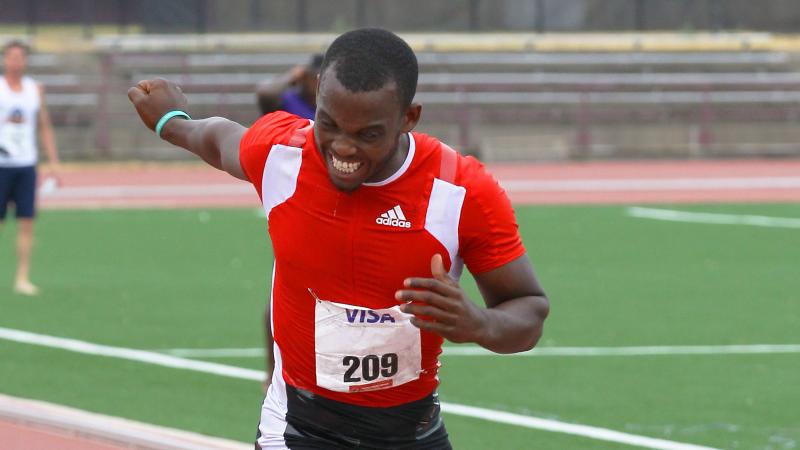 When and where did you begin this sport?
His first competitive races were in August 2009 at the University of Central Oklahoma Endeavor Games in the United States.
Why this sport?
He played basketball at high school and hoped to continue playing at college. He then discovered there were special prosthetic legs for athletes that would enable him to try running for the first time.
Club / Team
US Olympic Training Center: Chula Vista, CA, USA
Name of coach
Joaquim Cruz [national], BRA; Al Joyner [personal], USA

Memorable sporting achievement
Being a member of the United States team. (runtastic.com, 15 Mar 2013)
Most influential person in career
His father for pushing him so hard. (runtastic.com, 15 Mar 2013)
Sporting philosophy / motto
"Life is 10% what you deal with and 90% how you deal with it." (timesnews.net, 13 Oct 2012)
Awards and honours
He was part of the US 4x100m relay team that was named as the 2013 Paralympic Team of the Year by the United States Olympic Committee. The award was in recognition of the squad's performance at the 2013 World Championships in Lyon, France. The team also included Richard Browne, Jerome Singleton and Jarryd Wallace. (insidethegames.biz, 24 Oct 2013)

Help Our Potential Evolve [HOPE], a community organisation in his home town Kingsport, TN, United States, declared 13 October 2012 as 'Blake Leeper Day'. (downtownkingsport.org, 12 Oct 2012)
Other sports
He played varsity basketball at Dobyns-Bennett High School in Kingsport, TN, United States. (competitor.com, 30 Aug 2012; timesnews.net, 07 Dec 2006)
Ambitions
To compete as an able-bodied athlete at the 2016 Olympic Games in Rio de Janeiro. (teamusa.org, 08 May 2014)
Impairment
He was born with both legs missing below the knee and has worn prosthetics since age nine months. "The doctor told me he'd never walk," said his mother Enid. "We decided that we were going to treat him as if he did have limbs. No exceptions." (teamusa.org, 25 Jun 2012)
Other information
MOTIVATION
His parents inspired his athletic career by applying some reverse psychology when getting him fitted for his prosthetics as a child. "I remember my parents telling me that the doctors told them that I would never be involved in any athletic activity. They said I wouldn't be able to run and jump like the rest of the kids, that I would have to play the piano or something like that." (timesnews.net, 07 Dec 2006)