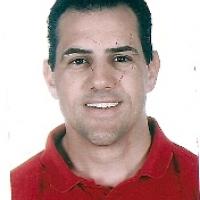 When and where did you begin this sport?
He took up Para athletics in 2003 at age 32 in Athens, Greece.
Why this sport?
Sport was part of his rehabilitation.
Club / Team
Spartakos: Athens, GRE
Name of coach
Petros Liatsios

In 2017 he sustained an injury to the T9 and T10 vertebrae in his spine, which left him out of action for 18 months. (Athlete, 24 Aug 2021)
Superstitions / Rituals / Beliefs
He wears his cap backwards while competing. (Athlete, 24 Aug 2021)
Sporting philosophy / motto
"Give it 110%, push yourself to the max." (Athlete, 01 Dec 2010)
Awards and honours
He was the flag bearer for Greece at the opening ceremony of the 2008 Paralympic Games in Beijing. (vimaonline.gr, 14 Sep 2010)
Other sports
He has represented Greece in rugby union. (timesofmalta.com, 18 Sep 2016)
Ambitions
To compete at the 2020 Paralympic Games in Tokyo. (Athlete, 24 Aug 2021)
Impairment
He broke his neck playing rugby union for the Greek national team in Malta in 2001. His injuries resulted in quadriplegia. (timesofmalta.com, 18 Sep 2016; vimaonline.gr, 14 Sep 2010; britegreen.co.za, 01 Dec 2008)
Other information
MEDAL ROBBERY
In 2017 robbers broke into his home and stole the bronze medal he won at the 2008 Paralympic Games in Beijing, along with his gold medal from the 2016 Games in Rio de Janeiro. Also stolen were his world championship medals, as well as gold jewellery. "They did not manage to search the whole house, however, they did manage to take some items that are inextricably linked to me and Sophia [his wife] - my medals from various events and Sophia's family heirlooms. We both feel that we have lost a part of our life and our personality. For me the medals had no monetary value but they had emotional value. I wish the thieves, when they find out, initiate the process of returning them to me, although it seems unlikely. I hope, however, that the police authorities will be able to catch them, so that the stolen items can be returned to us and, of course, those responsible will be punished." (documentonews.gr, 17 Mar 2017)