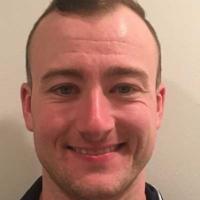 When and where did you begin this sport?
He took up the sport in 2010 at the CNY Flyers club in Skaneateles, NY, United States of America.
Why this sport?
"I still wanted to be able to move around and play sports."
Club / Team
Buffalo Sabres: United States
Name of coach
David Hoff [national], USA
Preferred position / style / stance / technique
Defence

Hobbies
Kayaking, fishing. (medleymag.wordpress.com, 11 Apr 2019)
Ambitions
To compete at the Paralympic Winter Games. (CNYCentral YouTube channel, 25 Jan 2016)
Impairment
His left leg was amputated below the knee at age seven as a result of osteosarcoma [bone cancer]. (teamusa.org, 26 Apr 2019)
Other information
NHL FRIEND
He grew up living next door to US ice hockey player Alex Tuch, who has gone on to play in the National Hockey League [NHL]. "Al lived the game of hockey, and at the time, I wasn't really a big hockey guy until I began playing sled hockey when I was a senior in high school. His passion for the game rubbed off on me though when we were playing hockey on his backyard ice rink or playing street hockey on Corlear Drive in Baldwinsville [NY, United States of America]. You couldn't ask for better memories and a better street to have lived on with Al and the street gang playing late into the night hours on that backyard pond, or even running around playing manhunt, baseball or basketball." (teamusa.org, 26 Apr 2019)