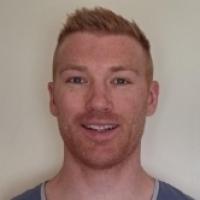 When and where did you begin this sport?
He took up Para athletics in 2015 at age 32 in Adelaide, SA, Australia, after recovering from the injury that ended his Australian rules football career.
Why this sport?
He wanted to find something to focus on after his accident, so he contacted the Australian Paralympic Committee who helped him find a sport that suited his abilities. "I found purpose in training towards something again. I felt lost following my impairment and athletics restored my sense of achievement and general well-being."
Name of coach
Steve Larsson [personal]

IDENTITY CRISIS
Taking up Para athletics, in addition to the support he received from the Australian Paralympic Committee, has helped him deal with the identity crisis he faced after the 2012 injury that ended his Australian rules football career. "Honestly it was soul crushing. It was really hard. I'm sure that there are people who had it worse than me as well, but it was a really tough confrontation, I guess, with yourself. You lose that identity of who you are and who you've attached yourself to over the years. You're lost, you don't know what to do with yourself." (abc.net.au, 13 Jul 2017)

OTHER ACTIVITIES
In 2015/16 he ran as an independent candidate for the South Australian seat of Hindmarsh. Between 2014 and 2019 he worked as a mentor for KickStart4Kids, a charity that helps disadvantaged school children in South Australia. (LinkedIn profile, 03 Oct 2020; athletics.com.au, 01 Sep 2017; sasi.sa.gov.au, 09 Jun 2017)